"The End of the Tour": a journalist's road trip with an author hits close to my own life and work 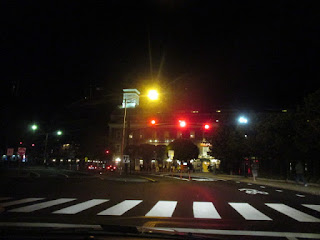 “The End of the Tour” (2015), directed by James Ponsoldt and based on the non-fiction book “Although of Course You Become Yourself: A Road Trip with David Foster Wallace” by David Lipsky, screenplay adaptation by Donald Marguiles, is very important to me personally in the top-down view it gives of the world of journalists, writers and authors since I have become a public “amateur” at that activity during the second half of my own life.  The dialogue brings up many issues for that world, and this film will surely be on the year-end Oscar and Golden Globes lists.  It’s kind of interesting for it to come out in late summer; it’s more of a late autumn season film.
Jesse Eisenberg plays the 30-year-old Lipsky in the winter 1996 road trip, to Illinois and the Minneapolis.  The downtown Minneapolis scenes reminded me of my own six years there (Nicollet Mall showed, but not my own residence at the nearby Churchill Apartments).  Some of the Illinois parts seemed to be filmed in Grand Rapids MI.   The film is framed by Lipsky’s writing about the experience in 2010, when he is middle-aged.  The transformation of Eisenberg (now 31 and looking “younger” than that) into someone around 45 (for a book-signing) is subtle.  He plays the roles as someone very aware of his own values and own course in life.  He has a girl friend (I thought the film implied he was married by 2010, but I’m not positive).  There is a scene where he chides Wallace for Wallace’s being too much into his own intellectual superiority over other “ordinary” people and tending to like to associate with people who won’t challenge him. 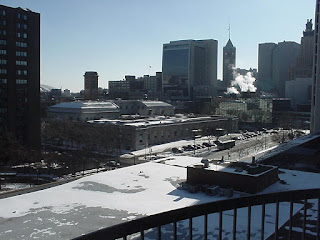 Wallace, who died in 2008 at 46 (according to Wikipedia, of self-hanging), is played by Jason Segel, who, in the part, looks older than the 34 he is supposed to be.  His Illinois house is somewhat cluttered, and his manner is a bit unkempt, and he seems to be a loner, sometimes waffling on Lipsky’s right to cover more personal aspects of his life.
The “tour” is the promotion of his novel “Infinite Jest”, over 1000 pages, which has been characterized as an “encyclopedic novel”   I glanced at it on Amazon, and it seems that the use of detail, the numerous footnotes, the complex sentence and paragraph structure and broad development, resemble these items in my own books, especially the first of my three “Do Ask, Do Tell” books, which is non-fiction but has a kind of autobiographical “plot” that would happen in fiction. (At this point, I’m not sure how many chapters it has, or whether it has a TOC or index, will have to look later.)  I’ll digress here and say that in my third “Do Ask Do Tell” book, I present both non-fiction and fiction sections, as if they were interchangeable, and I have a feeling Wallace may have done something similar.  Note that the Wallace novel has a character (a U.S. president) named “Gentle”; is that an intentional reference to Clive Barker’s hero in “Imajica”?   The plot, involving world political reorganization and specific entertainment censorship, and “samizdat”, isn’t specifically covered in the move.

So, Wallace is a bit like me (in a heterosexual incarnation), but in another sense, so is Lipsky.  Eisenberg plays the young Lipsky in a manner that makes me think he really could play a younger version of me if my DADT stuff gets made.  My goodness, he has already played Mark Zuckerberg.  That would put me in good company.

Both men were a little bit eccentric, in different ways.  Both men showed some signs of Asperger syndrome, but Wallace (with his awkward body language) a bit more.  But they’re almost like a tag team for these five days, even though Wallace gets jealous at one point in Minneapolis that Lipsky is paying too much attention to a potential girl friend.

One question is, what made a challenging, thick, self-indulgent book like “Jest” a best seller? Wikipedia says it was heavily marketed.  I get calls from my “self-publisher” pushing me to “market” mine as a commodity much more (even go on tours now).  I am beginning to see (from watching this movie) why they think this way.

Now, Lipsky actually works for “Rolling Stone” (now in trouble over the UVa lawsuits) and even has an office cubicle where he can write.  He is a professional, and “writes what other people want”, not his own story (as does Wallace, in a sense).  He has to convince his boss to send him on the tour with an expense account. It’s Lipsky’s responsibility as a journalist to get Wallace to cooperate well enough to give the RS readers a good article.  I didn’t realize magazines would spend so much on a story like this. It’s part of the economy.

Lipsky fumbles around a little bit on the logistics of the trip, not having yet gotten a hotel room, and Wallace offers to let him stay in a guest room, which he does.  Wallace’s dogs come in and insist on keeping Lipsky company (dogs actually love to sense the magnetic field of a sleeping man’s heart beat). The real-life Jesse Eisenberg is reported as fond of cats (adopting them) and of vegan diets (in Wikipedia), which seems to correspond to Reid Ewing and dogs.  But in the movie, both Lipsky and Wallace chain-smoke, even in restaurants, which was probably still permissible in 1996. (That’s different from me;  I don’t smoke, although most of Ayn Rand’s characters do so!  I have been “adopted” by a stray cat before, however.)

The “guest room” idea reflects a similar episode in my own life.  On New Year’s Day, 2003, while staying at mother’s home in Arlington VA for Christmas, I drove up to West Warwick, RI to meet with the now late filmmaker Gode Davis about his work “American Lynching”, which I have mentioned elsewhere in my blogs.  I actually stayed in his guest room that night, and drove back the next day.  I remember meeting up with Gode in a Friday’s restaurant when almost the first thing he said was that my own body language showed him that I have Asperger’s, which he said he has.  All of this is part of an evolving effort about which I think there will be more to report soon.

There's another point of comonality. Lipsky challenges Wallace as to whether the considerable presentation of drug use in "Jest" could be viewed by readers as suggesting that Wallace has "drug problems".  This parallels the situation with my own screenplay "The Sub" on sexual issues, which I explained on my main blog July 27, 2007.  I've talked about this issue there as "implicit content".

There is an incidental scene where the "team" sees the film "Broken Arrow" (directed by John Woo), with John Travolta, supposedly in the Mall of America (which had General Cinema when I lived there -- now I think it's AMC).  I saw that film in Virginia in 1996 about a year before my own move to Minneapolis.  It deals with a lost nuclear weapon, a point not mentioned in the new movie.

The official site for the film (A24) is here.   Production companies include Kilburn and Anonymous Content.

I saw the film at the Angelika Mosaic in Merrifield VA, before a small late weeknight audience.

Pictures:  Newport, RI, last weekend's trip (mine), and downtown Minneapolis in early 2003 from my pad in the Churchill apartments, about a half mile from the Nicollet Mall.
Posted by Bill Boushka at 10:33 AM