DC Shorts 2012 kicks off with a wide variety of material 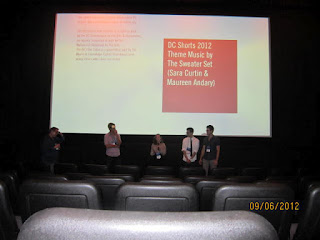 The nine films were as follows:

“Thinking Inside the Box” (UK, 8 min). presented a homebound young man who finds and keeps (or at least puts) a girlfriend “in a box” (and I don’t mean “Boxing Helena”, and I don't refer to the sci-fi film by Virginia-raised Richard Kelly).  Note: he effectively causes her to go into the box. That was an issue back in 1971 with my one episode of heterosexual dating.

“The Missing Looks” (“La Mirada Perdida”, Argentina, 11 min. directed by. Damian Dominisio) In Argentina in 1976, a politically rebellious family shelters its daughter in a fantasy world as soldiers invade, trying to protect her from being taken and having identity changed.

“Hand” (“Pyka”, 10 min, Ukraine). In a park, a woman finds a male hand and forearm, with no corpus, extending from a cardboard box.  She develops a relationship with the entity.  You can tell that it is male from the hair about the wrists, which is lost at the end as it turns to stone.  Is this “The Beast with Five Fingers?”  It certainly is an example of fetishism.

“Murder Mouth” (18 min, Australia, directed by . Madeleine Parry). The longest film of the set. This documentary sounds inspired by Mark Zuckerberg’s diet of eating only animals that he kills himself.  A young woman feels she will understand the lives she takes in order to eat (even plants) if she has to kill everything she eats.  She goes through fish, chicken, and a lamb.  The movie does demonstrate the need to feel closer to food.  The 701 Club in DC served a venison snack to the audience based on the movie.

“The Photographs of your Junk (Will Be Publicized)” (6 min, USA) was a  standup comedy routine.

“Schrodinger’s Box” (5 min, USA, directed by Britt Pitre).  A horror film based on the famous paradox of quantum physics, but film like “Copenhagen” (about Niels Bohr) and “Source Code” come to mind.  The young man and the cat change places at the end, and the feline wins. The paradox is described in Wikipedia here.

“Good Karma $1” (14 min, USA, dir. Jason Berger), a kind of “Pay it forward”.  In Boulder, CO, a young man (Alex) offers money to collect signs from the homeless, and then comes up with the idea of selling signs for $1.   Alex says he doesn’t concern himself with what the beggar does with the money; it feels good to experience generosity for its own sake.  Just the other day, I saw a sign (in Falls Church, VA) “Bad Health, Need Help, God Bless”.  I don’t like to interact with money cups from cars because of traffic safety.

“Guang” (14 min, Malaysia, directed by Shio Chuan Quek ). In a poor section of Kuala Lumpur, a young man takes care of an older brother with autism and tries to coach the brother to interview properly for a menial job. He becomes frustrated, asking why the brother can’t be normal, as the brother starts collecting cordial glasses that make musical pitches, so that at the end he can play the closing theme from Puccini’s “Turandot”.  This film was shot 2.35:1 and looked very professional.  This was the best film of the evening. 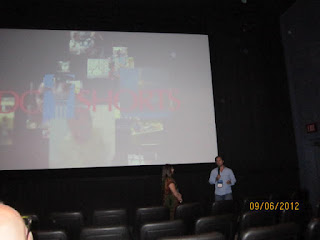 Only Berger (from the Karma film) showed for the Q and;A.  The large auditorium was about two-thirds full.

Audience ballots directed to vote for three films (or the ballot doesn't count).  I picked "Schodinger", "Guamg" and "Mouth".

The nine films were the following:

“Happy Voodoo” (8 min, USA) shows a man (in Austin, TX) playing with dolls, while the subjects corresponding to the dolls do his bidding.

“Strangers” (“Extranos”, 6 min, Venezuela) shows pickpocketing in modern Caracas.
“The Sugar Bowl” (20 min, Canada, directed by Shasha Nikhai and Rick Williamson), one of the two largest films. Is a documentary about the sugar cane industry in the Philippines, with particular emphasis on its economic collapse in the 1980s when the food industry invented more economical processed sweeteners from corn.  The once prosperous  Negros Island became poor, like “Asia’s Ethiopia”.  In remember that the Philippines held some fascination for NYC’s make gay community in the 1970s, which may have sensed that economic chaos was soon coming.

“The Queen of My Dreams" (3 min, USA), a film pretending to be in mock 40s style, shows a lesbian coming out in India’s Bollywood.

“My Night with Andrew Cunanan” (11 min, USA, directed by. Devin Kordt-Thomas).  The director, playing himself, dramatizes his encounter with serial killer Cunanan in a San Francisco gay bar in 1997, and plays out hypothetical scenarios where he allows Cunanan to go home with him. In the end, we learn that he refused, perhaps saving his own life. Kordt mentions that he had served in the Navy and recently gotten out, but doesn't specifically name the "don't ask don't tell" policy.

“The McGrory Clan” (4 min, USA). Some people like to cook, especially in NYC’s Hells Kitchen (near the Yotel).

“The Lonely Pair” (9 min. USA). A young couple meets in a bar on New Years Eve and then ponders uts future relationship in a snowy landscape in Georgetown, MA.

“Big Breakin’” (20 min. USA, “musical”, direted by Mattio Martinez), the other largest film of the set.   A young man Lance (Blake Peyrot) tries to whip up an “amateur” dance team in Burbank CA into doing a professional show, with ambiguous results.  The director says that a feature is planned.  It would be a little “Rock of Ages”.  As a short, it picks up speed as it develops after a slow beginning. Lance has a lot of energy and (gay?) charisma.

Directors from Breaking, McCrory, and Beautiful were present (as well as “Lance”) for the QA.