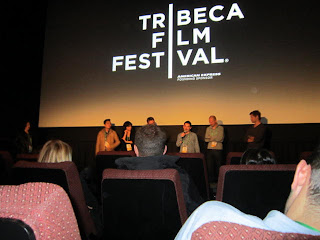 Tribeca Film Festival hosts a number of shorts programs, and the sequence called “Fallout” comprised seven short films, about equal in length, that deal mostly with serious political issues, some of an existential nature.
The presentation saved the best for last. “All that Way for Love” presents a young Brit  Simon (Andrew Simpson) hitching a ride in Kenya with a troubled older couple (Derek de Lint and Belinda Stewart-Wilson).  He gives in to procreative instinct when tempted.  The resulting fallout from “The War of the Roses” is a lesson on why HIV infection is a largely heterosexual disease in Africa and why it became deadly so quickly.  You still wish Simon well.  He has absolutely eye-popping looks (and the world’s hairiest chest).  The young British director, Henry Mason, said in the forum afterward that the concept came from writer Thomas Martin. Of course, we know that in nearby Uganda the Kony 2012 matter persists, as does some virulently anti-gay legislation in Parliament.   The film has a particularly cheery look at the beginning.
“Transmission”, directed by Zak Hildicth, sounds like a postscript to the WB apocalyptic film “Carriers”.  Here, a father an young daughter drive east from Perth into the Australian outback, among the few survivors left from a worldwide pandemic. The scenery is interesting in its monotony; Australia does not have a towering West like the US.  The pair are almost waylaid by a drifter who feigns needing help, and the little girl learns to drive a car herself and could wind up the world’s last survivor.  I wanted to see what the intentional community they were trying to reach would look like.
“Easter Eggs” (Slobodan Karajlovic) presents a mother in 1970s Yugoslavia hiding a Christian Easter celebration from her communist (Tito-ist) husband, who uses communism to back a patriarchal attitude.  The short could serve as a companion piece to Strand Releasing’s “Cirkus Columbia” about pre-war Bosnia.
“Chupachups” (Ji-suk Kyung) has a female soldier helping guard the border with North Korea returning for a visit with her friend (in a South Korea small town).
“Adirake” (Tati Barrantes, Andinh Ha) shows a Thai girl orphaned by the 2004 tsunami looking for a white elephant.  The Thailand Monarchy is credited with helping orphans, but the Thailand Monarchy is also "protected" under Thai law by the "lese majeste" doctrine which severely punishes insulting the monarchy online.
“Foxes” (Lorcan Finnegan) shows a married couple in a real-estate-bubble complex in Ireland, with a wife sinking into schizophrenia and a husband worried about bankruptcy.  As foxes visit, the mood becomes horrific.  Is the wife turning into a fox?  The movie trends to horror and an other-wordly effect at the end.  This concept was original with the director.
“Trotteur” (Arnaud Brisebois, Francis Leclerc, Quebec) has a young man outrunning a steam engine locomotive in a wintry landscape suggesting allegory with the Holocaust.
The presentation, at the Clearview in Chelsea, was cropped to show anamorphic widescreen; all but the first two (Asian) films were shot 2.35:1.

Here's another 10-minute short, 3 years old, "Our Hands Are Not Tied", about HIV in Africa, from CabriniCom.

Local merchants are collecting donations for AIDSWalk NYC in early May. 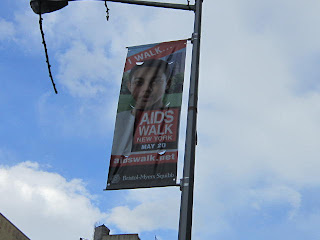