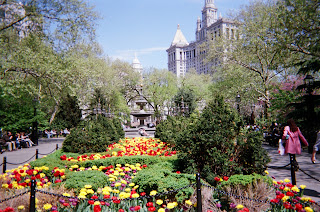 Since Woody Allen got Oscar attention for “Midnight in Paris”, it’s useful to look at an earlier black comedy, “Murder in Manhattan”, all the way back to 1993.
Woody and Diane Keaton play Larry and Carol Lipton, living in a Trump-like pad in Manhattan, and Woody is already concerned about his marriage as he ages.  When the lady (Lillian) next door (Lynn Cohen) is hauled out of the apartment  (in a bag) after an apparent heart attack, Carol gets suspicious because the neighbor’s husband (Jerry Adler) seems too happy.  Larry (and Woody plays the part with his usual talkative self) goes along with it to protect his own marriage.
The wicked humor comes after Carol thinks she saw Lillian on a bus, and again on the street.  She gets “Woody” to go snooping with her in the hotel where she supposedly lives (on a mini-treasure hunt like that in “Vertigo”), and she find “the corpse” there.  But then it really gets complicated.
The film uses footage from “Double Indemnity”  ("I did it for the money, I did it for the woman!") in critical points to bolster its own plot, and uses some of the same jazz music that shows up in this year’s “The Artist”.  There is humor at the bottom of an elevator shaft, on the Brooklyn Bridge, and even at a foundry, before a final “smoke and mirrors” climax. Carol’s suspicions might have been merited after all.

An important concept in this film, by implication, is that it really can be hard to identify people by facial glance. It's much harder than you think.  Online, this could lead to mistagging.
There is link on YouTube to see the movie “free”, but I don’t know if it’s legal. (I think the trailer below is OK.)  I would think Sony/Tristar would want YouTube to charge $1.99 or so for a legal rental.  That’s the fairest way (besides DVD’s) for studios to continue earning their royalties on older films.
Posted by Bill Boushka at 5:05 PM