"The Woman in Black": Daniel Radcliffe is in film noir, looking sharp; who remembers Eleanor Parker in "The Woman in White"? 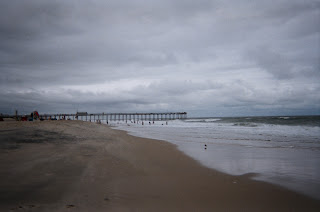 “The Woman in Black” at first comes across as a 40s-style noir thriller, gradually morphing more into the “B movie” period horror film, or “chiller”, with the usual array of plot twists and ideas.  The movie is somewhat freely adapted from the 1983 Gothic novel by Susan Hill, and is set around 1910 in an English coastal village, when cars were a novelty for the wealthy.
This is one of the first post-Potter roles for Daniel Radcliffe, 23 in real life, who plays a solicitor, Arthur Kipps,  trying to keep his job. He acts and looks a little older, the cinematography stressing some of the trappings of a grown man, even if he is almost always in a vested suit.  His boss tasks him to do all the discovery on a complicated rural estate after a mysterious wealthy widow.
He travels from London to the Umbrian coast, has to stay in a hotel attic, before venturing to “The House”, isolated by high tides, where he winds up holing up and dealing with the ghost of a Woman in Black, whose appearance foreshadows “kindertotenlieder”, or the deaths of children.  He has befriended a local businessman (with a car), Daily, played by Ciaran Hinds.  The townspeople seem to want Kipps gone and all the horrible secrets to stay buried in the tides and heath.
A prologue to the film, where three young sisters playing with a doll house suddenly go to the window and jump, sets up the "theme".


The story starts to become existential, as Arthur’s own background (as a young widower because of childbirth death and a young son of his own) becomes intertwined with the plot.  We can only say that the denouement depends a bit on the parallel world idea.  To say more would be to spoil.
One of the most technically demanding scenes involves pulling a lost body from the heath at night with a car, a rope, and Arthur’s showing more physical courage than I could demonstrate.  (He also runs into a burning house – but it seems kids and other people come looking for him to be their savior.
The official site is here.
The film is distributed in the US by CBS Films, which seems to be focusing on lower budget thrillers, often of Canadian or British origin.    CBS used to own Columbia, which is now Sony, which operates a comparable brand, Screen Gems.
I saw it in the AMC Courthouse in Arlington VA, downstairs, to a fair crowd, but in a smaller auditorium (third week), with a screen not quite wide enough for full aspect of 2.35:1.
There are some classic films with similar names, even somewhat similar concepts, such as “The Woman in White” (1948, dir. Peter Godfrey, based on the novel by Wlkie Collins, WB, with Eleanor Parker playing two women), as well as “The Woman in the Window" (RKO, Fritz Lang).  The Collins film was actually shown on a horror movie festival on late night television in 1963 called “Chiller”, but it is more conventional suspense and mystery rather than horror. Actually, in this new film, I thought I saw the ghost in white a few times as well as black.
As for Tommy Lee Jones and “Men in Black”, ("MIB") that’s a totally different world.
Posted by Bill Boushka at 8:16 PM