"The Vow": not so much about marriage as "identity" 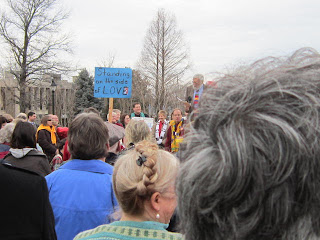 From the logline, I had expected “The Vow”, by Michael Sucsy, to become an exploration of marriage, of the willingness of people to commit “till death do us part” as much as to keep the commitment. Indeed the backstory of Leo (Channing Tatum) and Paige (Rachel McAdams) has a quirky marriage ceremony, but the vow is just as binding. And Leo wants to live up to it.  I saw this movie the evening that I had been to a gay marriage rally in northern Virginia, and expected to complete the irony. I was wrong.
The car accident in the opening is graphic and shocking, and we’re right into the narrative hook quickly. Well, Paige recovers all to quickly physically, and her amnesia goes back to a critical point a couple years back when she “changed” – gave up law school and followed sculpture, gave up her previous fiancée, and met Leo. Now, it’s as if that whole life had never happened.  It’s wiped from her identity.  It sounds like a subtractive schizophrenia – that what was a full life of a growing person seems now like a life that’s had one of its timelines deleted.
I’m not sure what this compares to.  When you have general anesthesia, you’re given a drug that deletes some of the memory before the operation, so it’s gone from your experience.  And memory loss, when pathological, can destroy what the person was.  But here, in the film, it seems convenient.  It simply removes a portion of someone’s life, as if a dream, and starts over from that point, as if there were no consequences.  Or as if we had jumped to a parallel universe.
The movie gives us a real-world explanation, more family business, and a reasonably romantic conclusion after all.  A wonderful stray cat even figures in.
But it is for science fiction to wonder if one body can house two lives, that start to come together the way dreams, or a previous incarnation, are gradually recalled.
The film, though made by well-known Spyglass Entertainment, is distributed by Sony Screen Gems instead of the usual Columbia Pictures.  The Chicago location often seems filled in by CGI (most of the film was actually shot in Toronto).
I saw this on a Tuesday night at the AMC Courthouse in Arlington.  A large auditorium was almost sold out. That’s a surprise for a school night, even if this was $6 night, and Valentine’s Day.

There's a point where Leo (it really is logical that he likes the cat) says, he has to make his life fall in love with him again.  I would never be up to something like that.  It makes for a good plot resolution.
The official site is here.
Posted by Bill Boushka at 7:48 PM