Sony-Affirm's Biblical "Jeremiah" has a modern meaning; another note on Sundance 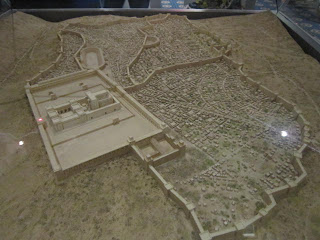 In a Safeway recently, I picked up an inexpensive DVD of the 1998 Sony Affirm film “Jeremiah” (subtitle, “A Prophet of Destruction”), with Patrick Dempsey as the prophet in a less-covered period of Old Testament history.
The film, written and directed by Harry Winer, is sold as part of the Sony Affirm “The Bible Stories” series, but it can be understood as a metaphor for very serious modern problems concerning free speech and the legitimacy of authority, even if the Biblical world it presents is that of a tribal Old Testament society driven very much by religion and its belief that Jehovah runs everything.
Dempsey was about 30 when the film was shot, but the Biblical story actually spans several decades. The look of the film is almost extraterrestrial, with Technicolor very saturated, somewhat in the manner of 50s Fox spectacles.
The film opens with the boy (Luke Sheppard) growing up in the village of Anathoth as a gifted child.  When he is a young man, God appears to him in angelic form and tells him he will not marry and should leave his family and become a prophet, warning the people and the King that Judah will be attacked from Babylon (Chaldea or Iraq) if they do not give up idol worship and materialism, and foolish political ventures.  The king adopts a “shoot the messenger” approach, and even Jeremiah’s family will not support him, as it believes he endangered them to become outspoken for his own ego (imagine the same situation with today’s Internet – and this film was made just before that possibility with social media was becoming evident).  It’s interesting to wonder how someone is chosen as a prophet by God rather than just being self-appointed.  In a complicated series events (following the Book of Jeremiah), Jerusalem itself is overrun and Jeremiah is imprisoned, in a cage and then a dungeon, and the people captured (in a way that reminds me of the Nazi invasion of Poland in 1939).  But Jeremiah is rescued and treated well by the captors (in a manner that somewhat reminds us of Joseph and Egypt), whereas Nebudchadnezzar  (Klaus Maria Brandauer) treats the Judean king most brutally, killing his sons and then blinding him in a brutal scene concluding the film.
Stuar Bunce plays Baruch, more or less Jeremiah’s best friend and also committed to the prophesy. Baruch is often clean-shaven.  There is a tendency for other young men contemporary of Jeremiah (including the Judean king (Hicham Ibrahami) to look a little bit too much like the prophet.  The film doesn’t go into “David and Jonathan” territory, and tends to present Jeremiah as a heterosexual  who really gave up marriage and having children on God’s calling (much like a Catholic priest is supposed to do).  It isn’t too hard to imagine other interpretations.
The film should not be confused with the 2002 science-fiction TV series by the same name, or the 1972 film “Jeremiah Johnson” with Robert Redford.
The full movie is available on YouTube (I’m surprised not to find a $1.99 rental charge, which would be appropriate).
Another curious film on the “prophet-savior” complex is “Joshua” (2002, Artisan Entertainment and Epiphany Films), directed by Jon Purdy, novel by Joseph Girzone, about a young man (Tony Goldwyn) who can “save” people and raise them from the dead, in a modern time small town; he eventually visits the Vatican.  I saw this in school when I was substitute teaching.
Here’s a note: the film “Slavery by Another Name” played at Sundance this year in the Documentary competition.  It aired on PBS and I have already reviewed it on my TV blog Feb. 13, 2012.
Posted by Bill Boushka at 5:11 PM