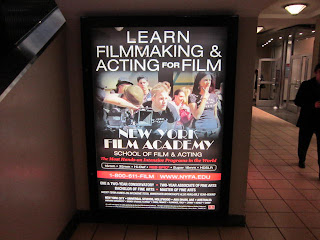 I attended a performance of the five Oscar nominees for best short film, Live Action, as put together by Magnolia Pictures and HDNet, at Landmark E Street in downtown Washington DC, where there was a fair early Monday afternoon crowd – and this is not a long weekend.
At least three of the films had enough substance that they might have attracted enough capital to make features.
The longest was “The Shore”, 31 min, directed by Terry George, and set in Belfast, presented now as reeling in unemployment with men illegally harvesting mussels from the sands at low tide. I wouldn’t want to eat them.  The story concerns two friends, Joe (Ciarin Hinds) and Paddy (Conleth Hill), separated by the years of separatism.  Joe tells his daughter his back story as they sit on a park bench overlooking the harbor (some flashbacks would help), and then try to track Paddy down, who, with an artificial arm (after losing an arm in the violence) fears the authorities are coming after him, leading to a climatic “race” in the mud flats, with music from “The Professionals” by Maurice Jarre (sounding rather like Malcolm Arnold) plays.   My own late mother’s family has a lot of ties to Northern Ireland, and she made several trips there.
“Raju”, 24 min,  Cinemascope, directed by Max Zahle, has a young German couple in Mumbai, India to adopt an orphan, who then disappears.  The couple must confront the possibility that they are the victims of a scam in “selling” kidnapped children to couples who want children, even though they think they are doing good by adopting an orphan. I’m not sure I buy the twist at the end.  The street locations are quite compelling.
“Tuba Atlantic”, 25 min, Cinemascope, directed by Hallvar Witzo, is a “clever” Norwegian film seeming to be inspired by Lars Van Trier, almost as a response to “Melancholia” (with Magnolia pictures likes).  Oscar (Edvard Haegstad) is told he has six days to live, and is determined to contact his brother in the US.  In some denial, he retreats to his coastal shack home, where he lives as a hermit. The paternalistic European government won’t leave him alone, and sends an “angel” Inger (Ingrid Vilken) to look after him. There is a sci-fi-like insinuation that she really can become an angel by tending to him, and despite his passing, achieve earthly immortality herself.  Oskar has built his own doomsday “tuba”, a huge musical tuba capable of sending a blast across the Ocean to reach his brother, but maybe destroying The World in the process.
The movie made me think of another possible scenario, if an exercise in nihilism. So here goes, my own cut at a short film.  On your Last Day, you sign off your computer and lock up your house, and go to the “Center”.  You have a nice reception and party, and then retreat to your “Roomette” with a Murphy Bed (like NYC’s Yotel).   You have some privacy and Internet access. But at midnight, all your own Internet postings get deleted. At 1 AM, your Internet access is turned off. At 2 AM, all other media. You go to bed. At 3 AM, water is no longer available.  At 6 AM, your soul starts its 100000-light-year journey to a black hole in the center of the Galaxy, so you can be reborn in another universe and live out your karma.   In the end, you think you’ve come out of surgery when you’re born again. Sound like a good short film?  Call the movie something like “General Anesthesia”. Your soul can’t be destroyed.  It will always resurface. That’s basic physics, even in the world of Lars Van Trier.
That leads us to the little short “Time Freak” (directed by Andrew Bowler, 11 min),  where nerd Stillman (Michael Nathanson) has built a time machine in a NYC Soho (I presume) loft.  His friend Evan (John Conor Brooke) visits him and goes along with the experiments.  Stillman’s problem is that physics won’t let him undo-redo the Time Arrow, because that would overcome entropy (of the Second Law of Thermodynamics).  The whiteboard in his loft is covered with partial differential equations.   Once, about 18 months ago, on the Metro in DC, a young man, 25-ish, was looking a student handout of what looked to me like Partial Diff-eq’s, when he dropped the handouts on the floor, and something bizarre happened (subject for another short film). I’ll say he was a perfect 10.  He knows who he is.  I guess we use these equations now for engineering, to improve the performance of the newest chips in our toy smart phones.
The first film, "Pentecost", by Peter McDonald, 11 min., has a priest forced to reinstate a delinquent altar boy for a critical Catholic service in Ireland.  The boy has been told if he doesn’t shape up, he’ll have to give up football (that means soccer, or maybe rugby).  The boy Damian (Scott Graham)  returns, and has his way to get even, and play make believe.  The film does have fun with the authoritarian nature of the Catholic Church, and with the power of priests (even before a hint of impropriety) over the lives of young men.
I think my vote goes to “The Shore”.  For what it has to say, it’s the most original and substantive.
The Cinemascope films (3 of the 5) were cropped on a smaller screen because of digital projection.
Here’s Magnolia’s site for the shorts presentation.
I saw this New York Film Academy poster on the Ballston Common today.  I didn’t know that the NYFA could confer academic credit and degrees.
Posted by Bill Boushka at 6:35 PM