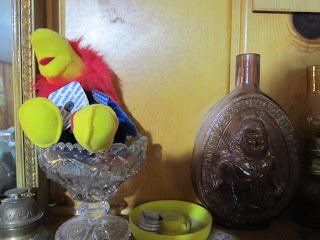 The title of the French Canadian black comedy (or film noir) “Good Neighbors” (shot in Montreal in 2010, in English, and set in an old Victorian apartment building) sounds like the lyric book from my own primitive song cycle, where I go on with “good master”, to meditate on the Gospel meaning of “communion” with others. The Bible seems to say, you have your own moments, but that’s it; the rest of you belongs to others.  (The best spelling is really “Good Neighbours”, in Quebec.)
That seems true newcomer Victor, played by Jay Baruchel  (the 18-year old lawyer in the brief WB series “Just Legal”), who tries to make friends with the cat lover Louise (Emily Hampshire) and wheelchair-bound Spencer (Scott Speedman) .  Victor, with his naïve nature, will have trouble avoiding suspicion as a serial killer terrorizes the neighborhood.
But the story really belongs to the cats (one of them is named Mozart).  Only they know what is going on, and they constantly try to tell everybody.  In that sense, the cats remind me of “Uggie” from “The Artist”.
Actually, cats learn their environment as well as dogs – in two cases cats have saved families from carbon monoxide poisoning. I wondered in this film if cats could talk in words and sentences (they can understand some words just like dogs), would their testimony be accepted in court?  And here the cats are loyal to Louse despite their knowledge of the worst, which includes the relevance of a cat-hating neighbor who leaves unwelcome voicemail message for Louse.
The film has some startling shots of the walkup spiral staircase (resembling Vertigo), setting up a similar shot of the fire escapes, which will figure into the story.  But one of the cats gets the last laugh.
There’s a really odd scene where Spencer gets a massage, and his lightly haired legs are still muscular despite his inability to walk.
The film is directed and adapted by Jacob Tierney, adapted from a novel by Chrystine Brouillet.  The 2.35:1 format may be unnecessary, given the preponderance of close-ups.
The original part of the film score is funny, but the film also uses the music of Dvorak effectively. Early, it plays the opening of one of the Legends, and later it excerpts from the first, third and finale movements of Dvorak’s  massive (if a bit immature) Symphony #1 in C Minor, the Bells of  Zlonice.  This (a bit overlong) work is moving despite its unevenness: the Adagio is Brucknerian, and the finale has some unusual harmonic experiments for the time, and a brazen close which is usually not performed to best effect.  Could a younger conductor like Dudamel  make this piece really effective?  I can only presume that the director really likes lesser known classical music.
The film is distributed by Magnolia Pictures, which lately has preferred dark humor, which works better socially in a theater than at home with a DVD. It takes talent to make a film like this funny.
Magnolia’s site for the film is here.
Posted by Bill Boushka at 11:09 AM