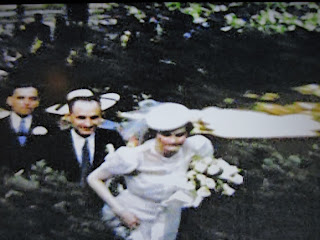 There is a film “The Wedding Weekend”, a comedy directed by Bruce Leddy, distributed in 2007 by Strand Releasing and First Run, that “Creative America” says was harmed by piracy attempts just before release (see my Dec. 7 posting for “Stolen Jobs”).  The film is also known (overseas) as “Shut Up and Sing”, which is the name of the production company and a key line in the script, but that brings up another point, to be covered below.
Six guys who had formed an a cappella group in college reunite fifteen years later for a friend’s  (Mark Feuerstein) wedding in the Hamptons on Long Island.  The guys have varying success in life and look pretty good (particularly Spooner [Chris Bowers], but are concerned about their lack of commitment and wayward lives. They worry that their lives will soon go downhill as they approach life’s midpoints (they say it’s 11:30 AM on a 24 hour day.)  One of them (David Harbour) worries about a receding hairline, which really isn’t noticeable.  They get in trouble, all right, with a police sting for prostitution, and don’t “stay out of jail”.  One of the guys has gotten fired for cause, tries to shoot himself, and his girlfriend (some of the old girl friends are there) dumps him.
The script is appropriately flippant. When the future groom announced “Fellows, I’m getting married”, the guys ask “when’s the baby”, and later express their own resignation to the necessity of marriage. (I think of “My Fair Lady”: “Why can’t a woman by more like a man”.)
The film has many songs but comes across as situation-to-romantic comedy, not a musical. (It’s really not like “The Artist”; maybe it’s just a touch of “Jersey Boys”.)  The wicked song during the end credits speaks of obligations to society when you grow up, like being able to go to war.
As to the title change, the producers/distributors  got into a legal battle with The Weinstein Company which had released the documentary “Dixie Chicks: Shut Up and Sing”  (or "Shut Up & Sing"), directed by Barbara Kopple and Cecilia Park.  This somewhat crude documentary (technically) traces the history of the group after singer Natalie Maines publicly criticized the Bush Administration – the trio having come from Red State territory. The film made a powerful argument about free speech "in practice".
Normally it’s not a problem for two films to have the same name unless one of them is part of a franchise or TV series (like “Terminator”, Mission Impossible”).  Maybe the short time span between the two films (I saw the Dixie film at Landmark in 2006) created a trademark argument. Maybe the controversy then attracted the “pirates”.
“The Wedding Weekend” should not be confused with “Wedding Crashers”(Davis Dobkin’s big comedy with Owen Wilson and Christopher Walken about traveling wedding busters, for New Line, which I saw in 2005).  There are other comparisons: “My Big Fat Greek Wedding” (2002, Joel Zwick, not my favorite), and “The Wedding Singer” (1998, with Adam Sandler).
And while I’m at it, I’ll mention Melody Gilbert’s one hour documentary “Married at the Mall”, referring to the Mall of America, which I watched in a class in Minneapolis in 2002.
The official site for the ("Wedding Weekend") film is here.