"Swimming in Auschwitz": documentary by six survivors re-airs on some PBS stations 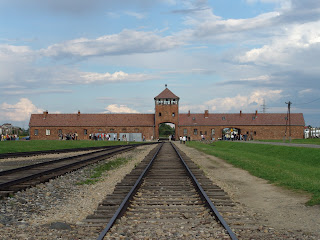 On Wednesday, Howard University Television aired a slightly condensed version of the documentary by Jon Kean, “Swimming in Auschwitz: Six Stories of Survival”, from Bala Cynwyd Productions.
Six Jewish women who survived the notorious concentration camp in the Holocaust tell their stories. The narrative is spliced with many black-and-white film clips and photos of life in to-be-occupied Europe before World War II.
The women include Renee Firestone, Erika Jacoby and Lili Majzner.
In most cases, the women report a relatively rewarding middle-class life being taken from them by outside invading enemies.
One woman from Czechoslovakia said that she had been told her country was a Republic modeled after the United States.  Nevertheless, it was easily overrun.  She described a life of outings and theater that was replaced by curfews, and eventual deportations.  Eventually she would have a taste of the old life, pretended, in the Paradise Ghetto Theresienstadt, before a three day train trip to the camps.  (The same sequence is followed in Herman Wouk’s epic “War and Remembrance”.)  Another was told that the Germans were a well-educated people, and such people aren’t aggressors.  One woman from the Netherlands described a strict upbringing in foster care and not noticing the loss of freedom.
The women described the harrowing process of arrival at Birkenau, with the segregation of women, and their shoring which they specifically say included the humiliation of removal of all body hair as well.   (There is a scene like that involving gale male prisoners in the 1996 film “Bent”, based on the play by Martin Sherman.)    The film shows the notorious “Arbeit macht frei” sign several times, and the women say that when they first arrived, after the three days in the box cars, they were curiously “relieved”; it didn’t “look bad” at first, for about the first hour there.
During the last months, before liberation, some of the women were removed from the camps and sent to German factories as slave labor. The Nazis wanted to eliminate evidence of what they had done (and eliminate witnesses).
Erika Jacoby is  introduced at a performance of the film in this YouTube welcome by Dr. Spiegel.
There is a very short YouTube vidoe by Jarke Mensfelt showing the actual "swimming pool".
Visitors might be gently “warned” that YouTube has a  nearby nine-minute video by “Nokikov” that presents, rather flippantly, the Holocaust denial argument  mentioning the pools and other "luxuries" (it carries a user-generated warning).
Wikipedia attribution link for picture of Birkenau gate.  I visited on May 25, 1999, by hired taxi, after arriving in Cracow that morning on a night train from Berlin.
The most harrowing moment in all of the movies about the place is the flashback scene in Alan J. Pakula’s film “Sophie’s Choice” (1982, based on the book by Wiliam Styron) where Sophie (a younger Meryl Streep) has to choose between two children as she arrives at the camp. I remember seeing this at Northpark in Dallas that year.
Posted by Bill Boushka at 7:11 AM