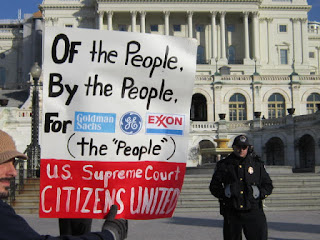 Sundance is offering some of the films from the current festival for online viewing, from this link.
I watched “Advise & Dissent” (or “Advise and Dissent”), 2009, from David Van Taylor and Lumiere Films. This documentary looks at the process of picking justices for the Supreme Court, through the eyes of the “Third Branch Conference” as well as political pressure groups on both sides, ranging from People for the American Way to the Family Research Council.  The Cato Institute is mentioned in the credits.
Much of the film covers confirmation hearings of President Bush’s appointments of Justice John Roberts and Samuel Alito, along with the failed appointment of Harriet Miers.  Roberts was non-committal in his answers (he had to be pressed to name his favorite movies – “Dr. Zhivago” and “North by Northwest” but not “Casablanca”).  Alito was challenged heavily as to his record as an appeals court judge but at the end he received an apology for the grilling.
The early part of the film makes a big point of the tendency of the religious right to manipulative language of freedom for its own reactionary mindset.  The 1987 hearings of Judge Bork (“Slouching Toward Gomorrah”) are excerpted, and at one point Bork is grilled as to his views of the right to privacy. Bork fires back “privacy to do what?”  Later the right wing complains about the “minions on the Left” and that includes George Soros!  (In my own DADT book, I had coined the phrase “nightbreed minions”, referring to a Clive Barker film.)  It’s clear that the Right wants to retain the “freedom” to barge into the personal lives of people it considers dependent or morally less worthy. The film does mention many of the decisions eventually rooted in large part on privacy, ranging from Griswold v. Connecticut (contraception, even within marriage, 1962) to Lawrence v. Texas (2003). Of course Roe v. Wade (1973) is mentioned, and it has always seemed that the abortion issue is a proxy for a larger issue of willingness to commit to protecting the vulnerable.
The official site is here.
I chose the YouTube option to watch the film, for $2.99 (48 hour rental, convenient  automatic charge for those with Google accounts).  Low-cost YouTube licensed rental of new independent films sounds like a constructive answer to Hollywood’s complaints about piracy, giving some more money, however modest, back to filmmakers.
The Sundance Film Festival runs in Utah Jan 19-Jan 29.
Posted by Bill Boushka at 3:11 PM