"Singin' in the Rain" (1952, MGM) is a wonderful musical about movie-making, silent to sound 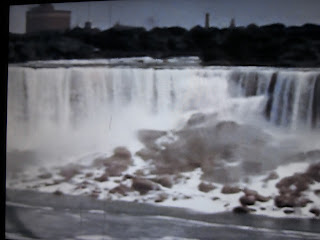 “Singin’ in the Rain” is indeed the cultural parent of “The Artist” (Dec. 23). The MGM film (but now belonging to WB) is quite garish in its Technicolor, but old aspect (4:3) ratio, about a year before Cinemascope was premiered.

Don Lockwood (Gene Kelly) and Lina (Jean Hagen) are real life partners as well as actors bound to a studio (under the old system), so far just in silent film When (in 1927) “Monumental Pictures” faces competition from a rival studio (which was actually Warner Brothers) for making “The Jazz Singer” as sound, it decides that it will need to make the silent “The Dueling Cavalier” into a sound musical (as “The Dancing Cavalier”). Lina’s pipsqueak voice is an issue for a “sound film”. But Kathy (Debbie Reynolds) has already established her reputation for sound and would make a replacement for the voice part. Yes that leads to real life romantic complications. But Lina (and others) take voice lessons that anticipate “My Fair Lady” (1965). The experiments with sound get humorous, picking up hearbeats, and a sample early BW “talking picture” about chivalry gets hilarious. The film gets into the technical difficulties of showing early sound pictures “in synch”. Another issue is how you take a regular drama and make it into a musical (who composes it, what is the musical style and technique, etc.) There’s some pretty silly stuff about how the French Revolution fits in (not really that funny as history). There’s a scene where “Cavalier” is being filmed and it dissolves from color back to black-and-white, an interesting technical effect.

Toward the end, the film becomes increasingly complex as it integrates the subordinate “Cavalier” musical with its own story (especially the song and dance), finally leading to a confrontation on stage where Lina threatens litigation and then has to demonstrate to an audience that she can sing. They try a ruse backstage. If they get the key wrong, then “Singin’ in the Rain” will get to use some polytonality.

The film is really quite remarkable in the way it can weave political and legal issues with layered storytelling, and song. And this is “only” 1952, in a “G” movie, but there’s plenty of thought material for adults.

There’s an early embedded BW excerpt from a 1921 “Vitaphone Phonofilm”.

There’s a scene where Don’s jacket gets torn – and inspiration for the “coat” scene in “Artist”.

No doubt, though, this 1952 classic is much “lighter” in touch than TWC’s essay on the subject, which rather inverts the plot. I wonder if the re-invented MGM and Sony-Columbia will try a remake.

I don't find any actual films "Dueling Cavalier" or "Dancing Cavailier" in imdb.

I did see the 1980 version of “The Jazz Singer” (by Richard Fleischer) in Dallas, not in a good theater as I recall. (I think it was that old Northtown Mall – now a Dart rail yard.)

New Year’s Day (it’s New Year’s Monday, Jan. 2, actually) has typically been a movie day. On Jan. 1, 1955 (a Saturday), I recall that “the family” went to see Billy Wilder’s BW “Sabrina” New Year’s Night. I never found a reason to see the remake.

Labels: history of cinema, The Artist