"Paranormal Activity 2" no longer has much punch 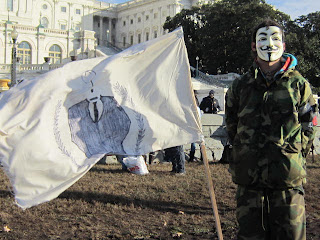 I got around to seeing “Paranormal Activity 2” finally, and found what seemed to be the same family carrying on its handheld, Dogme-style documentation of haunting, a year later.
After an apparent burglarly, the family sets up more security camera equipment and record everything on a DVR.  They also hire a nanny, who soon informs them of more problems.  The film progresses much as the first one did, with many black-and-white clips of “activity” caused by unseen entities in the middle of the night, and then even during the day.
This time, the demons make Biblical or Passover-style rules, threatening family members based on their position in the family (putting the first-born male up as collateral). The film gets speed toward the end, leading to sudden and abrupt violence.  In a different kind of film, we’d call it tragedy.
It’s interesting how old fashioned “family values” make everyone vulnerable.
Katie Featherstone and Michah Sloat star as “themselves”, although Micah’s “future” may now be with the undead.

This sort of film was so effective when new (like “The Blair Witch Project”).  Sequels tend to get stale, and you need to see it in a theater with other people to feel scared.
Paramount has found this little franchise a real cash cow. (It really should be branded as “Paramount Vantage”.)  This second film (2010) cost just $3 million.  It’s directed by Tod Williams, whose 2004 film “The Door in the Floor” gave us Jon Foster as Eddie O’Hare, the young man hired by a Long Island family in disarray, maybe a mini version of “Revenge”.
I do hear sounds in my own house at night.  The plumbing?  Squirrels on the roof?

Picture: I know that is based on "V for Vendetta".
Posted by Bill Boushka at 7:07 AM