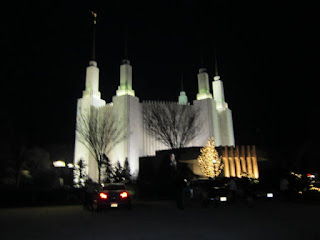 I journeyed to the Mormon Temple Visitor’s Center in Kensington, MD yesterday to see the two largest films offered.
In the main auditorium I saw “Joseph Smith: The Prophet of the Restoration” (61 min), on a big screen that appeared to be Imax, the aspect cropped to almost 2.35:1.   The photography of early 19th Century America is crisp and stunning (almost like 3-D without the need for glasses), with a tendency to add reddish hue to some scenes, giving some of the foliage an almost extraterrestrial look at times.  The LDS church is very capable of making professional-quality film.
The 15-year-old Joseph Smith comes across as the world’s nicest teen, who has taught himself to read well enough to decipher the golden plates he discovers.  The religious family and community around him discourages his new ideas, but in time he perseveres.   In the early part of the film, it almost seems as though a whole new religious movement gets started by the charisma of a prescient teenage boy.  (No, I don’t think that Justin Bieber could start a church.) But the actor who plays the young man looks different, but more like the usual pictures of Smith.  Out of very little substance Smith seems to win converts to his idea that the real apostles are to be “restored”.   The film also focuses on the idea that restoration offers salvation to everyone, even those who have already passed away.  (The film presents a link between the passing of his own older brother and then the latter practice of being baptized for the “dead”.  The film doesn’t go into deals about the theology of the pre-existing soul or the stages of afterlife.)    The rest of the film traces the persecution of the Mormons in various places in the Midwest until Brigham Young takes them to Utah.  The angel is shown as a “person” only once.  It’s ironic that a religious group that was so persecuted would favor a society that is even more socially conservative and nuclear-family-oriented.  The film does stress the importance of gender and family roles and does mention the concept of “eternal marriage”.
I was the only person in the auditorium for the 12:30 show, which seemed to be "just for me". Two young women entered and told me that the story was “true” and started to proselytize a little.
The church staff said the film was shot in 2005 and also has a slightly longer 69-minute version (which may explain more theology).
Many films, mostly about the LDS Church and its leaders in more detail, are available to be seen in request in the smaller auditoriums.   But I saw the other better known film, “The Testaments: One Fold and One Shepherd” (64 min), also in full Cinemascope.  The film traces the history of an artisan and his son in a Mayan community in parallel to the life, crucifixion, and resurrection of Christ. After the Resurrection, and a catastrophe at the Mayan temple settlement, Christ appears and restores sight to the artisan.  One item of accuracy: most of the Mayan areas were in relatively flat country, without the green mountains shown (and probably inserted with CGI) in the film.
As far as anthropological evidence (or lack of) for Mormon progeny in the New World among Native Americans, see footnote 104 on this Wikipedia reference, link.
I did see these films the same day that Mitt Romney was winning the New Hampshire 2012 primary – and that’s a convenient coincidence.
The Mayan history that we know well (when the Mayan cities were well established) would take place about 1000 years later, before the Maya would fail.  Mel Gibson has made the two “Hollywood” films that seem most relevant: "Apocalypto", for Touchstone Pictures, in 2006; and “The Passion of the Christ” for New Market Films, the last film I would see with my mother in 2004.
In 2007, Christopher Cain directed a frontier film “September Dawn” about offshoot sect from Mormonism and a confrontation with pioneers on September 11, 1857.  “God’s Army” (2000), by Richard Dutcher), shows the life of Mormon missionaries in California: the young men pay for their own missions.  And “Latter Days”, by Jay Cox, tells the story of a missionary who discovers that he is gay.
When I was in the Army (1969), one soldier was doing genealogy and was considering asking for a recommend in the Mormon Church.
Mormonism certainly strikes me, at least, as having a “works-based” concept of salvation. Are people called to "live with God" or to "become Gods"?

Actually, cosmological physics (especially the Second Law of Thermodynamics) and mathematics would have a lot to say about the potential of immortality.  One might be able to prove mathematically that only a finite number of souls could enjoy immortality, it seems to me.   The concept of entropy would explain why reproduction (procreation) is necessary.

The Washington Post has a major story on Mormon social values (by Michelle Boorstein) Jan. 12, here.  A larger percentage of Mormons than of the general population believe that being a successful parent is the most important thing one can do and believe that having a good marriage is mandatory.  Note that the moral belief centers on the idea that a person is required to perform a pre-existing obligation (getting and staying married and raising children as an oblication), rather than follow through on a choice already made (having sexual intercourse that happens to result in children), the latter of which has become the "libertarian" idea of personal responsibility.

The Pew Research Center has a report Jan. 12, 2012, "Mormons in America: Certain in Their Beliefs, Uncertain of Their Place in Society", here.
Posted by Bill Boushka at 7:14 AM