Hallmark's "A Smile as Big as the Moon": a teacher's passion gets his special education kids to Space Camp 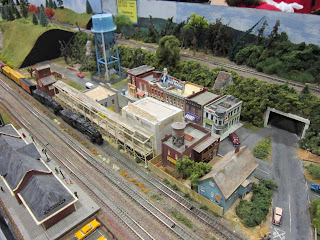 Hallmark’s “A Smile as Big as the Moon”, directed by James Steven Sadwith, certainly might have been a hit movie as a theater release. And it certain illustrates the maxim of screenwriting, to create maximum urgency and rooting interest.
John Corbett plays a Mike Kersjes, special education teacher (and football coach) in Grand Rapids, MI, with a driving passion to make his kids prove to themselves that they can make it.  His technique: expect from them the same thing you expect from everyone.  The film tells the (partly) true story of his drive around 1989 to get his students to Space Camp in Huntsville, AL.   His technique is to get them to focus on teamwork, during which they rapidly catch up in social skills.
The kids have varying appearance and demeanor. Some seem to have Asperger’s syndrome and are actually very good with a narrow range of tasks (like one boy who builds models).  The teacher has the kids invent a board-game (that looks a bit like the old Mr. Wiggley Game, but with space destinations) to raise money, but eventually he turns to a local fast food business owner who employs some of the kids after school.  Some kids actually do quite well in structured employment.  Most of the kids in the film appear to have issues that are medically treatable and appear to be capable of catching up with the demands of the outside world.  The story of JMac, which may be a film soon, comes to mind (Book reviews, March 18, 2008).
I actually visited the Space Camp as a tourist in 1989, and saw the water tank, where participants have to assemble apparatus while swimming underwater.  As a kid, I did not swim, and would have had extreme difficulty with some of this myself.  I was afraid to go on these things in the middle school years.   Some of the other training, such as zero gravity, appears physically challenging. The phrase "The Right Stuff" (also a 1983 WB film) figures into the climax.
I worked as a substitute teacher from 2004-2007 in northern VA and sometimes had special education classes.  Some of the classes were for the very severely challenged  (much more so than in the film) who could not have handled this.
The film aired on ABC Jan. 29.
The official site is here.
Here is a typical Space Camp scholarship site.
Posted by Bill Boushka at 9:20 PM