"Bad Actress": what does a has-been soap star do to get back into the limelight? 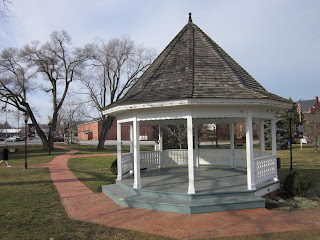 Well, ready for a cynical black comedy about Tinseltown and the B-grade actors?  Well, you’ll enjoy Strand’s upcoming “Bad Actress”, directed by Robert Lee King.
Beth Broderick plays Alyssa Rampart-Pillage, who got knocked off the fame stage of soap opera in the 90s as she outgrew “HMO Nurse”.  (Funny, “Days of our Lives” has been reincarnating the characters and rehiring the actors it had axed.)  She’s had to work in the real world, just doing commercials for her husband’s air conditioning business. That’s Bernie (Chris Mulkey).  When her talented daughter Topanga stages an Earth Day demonstration at the opening of a new store, tragedies ensue and a body count mounts. The notoriety will give Alyssa her new chance for another "career".  We may learn what Alyssa and cousin Morris (Vincent Vintresca, and he is not a cat) are capable of, with the complicity of virile gigolo boyfriend George (Andrew Levitas), who is all to willing not to stay out of jail.  Alyssa’s other two kids, fraternal twins Rebecca (Whitney Able) and Russell (Ryan Hansen) are the only two solid people in the movie.   Besides environmentalism and police work, the movie has some interesting explorations into wills and the “dead hand” issue – all because Bernie, after seeing Topanga’s ghost, gets religion and starts believing in sacrifice and charity.
The movie even takes a poke at the Oscars at its “climax”.
The official Facebook is here. The “official site” is here.
The DVD is available Feb. 21, 2012 and the pre-book is Jan. 24, 2012.
The film played in international film festivals in New York, Miami and Cleveland.
This may be a good play to mention a 2002 film for comparison, Brent Huff’s “100 Mile Rule”, where some Michigan businessmen decide they can “play” because they are more than 100 miles away from their wives when at a sales conference in LA.  The film really hits hard the nature of “sales culture”, that is, “always be closing.”   I saw this at an international festival in Minneapolis in 2002.
Posted by Bill Boushka at 7:05 PM

Thanks for the review and putting the word out on your blog about Bad Actress's release on February 21! Our website is up and has been for quite some time - perhaps there were tech issues when you tried to visit: http://www.badactressmovie.com/

Can you please update your post with this news, so anyone reading can visit the site for more info?

As for ambition, aim high!