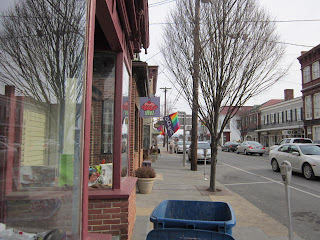 “Albert Nobbs” , directed by Rodrigo Garcia, comes across as clever in concept, perhaps.  Shouldn’t 21st century audiences learn about the way women had to masquerade as men in the 19th century, at least in the British Isles, in order to survive?  After all, female authors took manly names.
Glenn Close (who helped write the screenplay) does have some awards for playing the role of a man as she ekes out a living in a small Irish hotel.  If you look closely, even when she’s clothed fully (all the time, almost), she doesn’t look as “masculine” as others, such as Joe (Aaron Johnson), who, after fired at the demand of a customer from another job, gets a chance to redeem himself by fixing the boiler at the hotel. Joe befriends and eventually impregnates Helen (Mia Wasikowska) and Albert is only too happy to take over raising the child since that will suit his purposes as he plans to start a new business, a tobacco shop.
Albert’s ruse is challenged when he is asked to share his lumpy bed with a visiting painter Hubert (Janet McTeer) who also has to masquerade as a man, and fortunately is “sympathetic”.  It’s interesting how there was so little physical privacy in this society.  But that was normal.
In this world, these women sometimes lived with other women as publicly heterosexual couples, and even got to raise OPC (other people’s children).  Nobody thought about this as lesbianism, although in many cases these couples would have liked to be able to live openly as female partners.  Neither Albert nor Hubert want to live as men, although their sexualities seem fluid.
In fact, there is some conventional male homosexuality at the hotel, with the Viscount (Jonathan Rhys-Meyers).
The film is distributed by Roadside Attractions and Liddell Entertainment.  Will Lionsgate handle the DVD? Once again, a film that got into the awards season by Dec. 31 was not available to the public until the end of January.  I saw this at the AMC Shirlington in Arlington, in a smaller auditorium but good full widescreen projection, before a moderate crowd, first show Friday night opening day.
The official site is here.
Glenn Close gives an interview here (YouTube video by StarkInsider) where she says “Independent Film almost doesn’t get made".
Posted by Bill Boushka at 7:45 AM