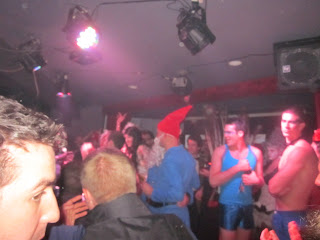 In the previous review, I talked about going “upward” for love, but here is a film from Everett Lewis (and Breaking Glass Pictures) about being dragged down by one’s own temptations and lusts, only to be surprised by what one does find.  Yes, I see a lot of films with “bad behavior”, but in “Lucky Bastard” (2009), all the main characters find some redemption.
Rusty (a handsome Patrick Tatten) is a successful closeted architect about 30, with a straight business partner Garret (Timothy Ryan Cole).  After a couple of LA and Hawaii real estate projects fall through and the two have a falling out, Rusty is overwhelmed when a drifter Denny (Dale Dymkoski) comes on to him in an LA convenience store.  The reserved Rusty is unable to resist the attention and warmth, as Denny’s desire to use him as a sugar daddy to feed his drug habit puts him at real risk.  Gradually, the characters start coming to understand each other’s backgrounds.  Denny thinks Rusty “has it made” (and is "lucky") and Rusty says he never considered doing anything else other than succeeding. Denny got out of the ghetto with a football scholarship and then threw it away for gay life.
There’s a scene in a disco dive halfway into the film, where Denny says that when people “fool around” on the dance floor, it doesn’t mean anything.  In my own experience of observation of discos, that doesn’t sound true.
Here is the official site.
Posted by Bill Boushka at 6:37 PM