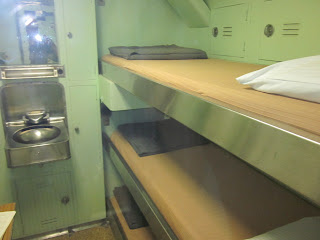 “Romeos” (or “Romeo’s different than you think” or “Romoes anders als du denkst”) is a new film from Sabine Bernadi from Boogiefilm (Germany), Kino,  and Strand Releasing (Jan. 17).
Lukas (Rick Okon) opens the film telling us by Skype that he is going female-to-male, and giving himself injections.  Then he moves into a female dormitory during a period of civilian service, in Cologne. (Germany required military service for men until 2010, but civilian service could be substituted; this point about  potentially unequal treatment of gender in a liberal modern state hits home immediately – in the film, it seems that both genders do at least civilian service, though.)  He soon meets  Fabio (Maximillian Befort).  Pretty soon the film is exploring the idea that gender identity and sexual orientation are totally separate concepts.
Very early, we see Lukas exercising and doing measurements, and inspecting his darkening leg hair. Only later do we see visually that none of the surgery has been done yet.  I don’t know how the film accomplished this, whether the actor is transsexual, or some sort of CGI was used – but it so, it is very effective “technically”.  Gradually, the film develops Fabio, and a couple other characters from men’s dorm, especially the attractive Sven (Felix Brocke).  At the end, the “obvious” issue with a relationship – and the “discovery process” – must be dealt with. One of Fabio’s shirts had a particularly convenient cut for the near-final scene.

There's a bit of irony. Lukas is ready to fall in love with a man when he is one himself -- biologically, as much as possible -- and would refused earlier, when there would have been a possibility of children.  In scenes of Lukas, the female aspect is indeed made to seem grotesque.  This indeed is portrayal of "upward affiliation".
When I was a patient at NIH (1962), one of the female patients said she wanted to be a man, hardly acceptable in 1962. My own father would say, after visits, “Poor (name), she’s not very feminine”.  In 1993, one of the guest on Scott Peck’s radio program in Washington was a sailor who had gone male-to-female transgender, forced out of uniform, but still in civilian intelligence service, and a lesbian.
The film says that Germany’s health care system pays for Lukas’s change.  When I grew up in the 1950s, performance according to biological gender was viewed in “moral” terms only, as if (as the Vatican claims) it was only one special challenge among many that almost everyone must face while meeting obligations to others.  No question, the status quo was about preserving power structures.
Official site from Media Luna in Germany is here.
Posted by Bill Boushka at 12:41 PM