"Old Joy": a touch of "Brokeback" and even "Bugcrush", but so much gentler; men need their rites of passage 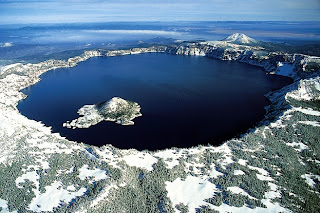 “Old Joy”, a little film directed by Kelly Reichardt from Kino, combines elements of both “Jerome’s Razor” and “Bugcrush”, and even “Brokeback Mountain”, in a road movie that stays in “kinder and gentler” and simpler territory. (A more distant relative is Gus van Sant's "Gerry"; van Sant certainly could have made this particular film and impart a similar feel.)

Mark, an attractive ("cute", frankly) and slender late 20s-something young man, is settling into married life somewhere around Portland OR.  (If I read it right, his wife is only recently pregnant.) One day he gets a call from an old buddy, a scruffy and balding quasi-drifter Kurt (Will Oldham), who wants to get together for old times and go on a (summer) hike with him in the Cascades, and take him to a particular hideaway he has built with his carpentry skills.  Mark, curious, agrees, and his wife even reassures him he doesn’t need to feel tethered.  She suspects he has an old yearning to satisfy, before they get on with a “real” family.

The film spends about an hour taking us into the woods, giving little clues.  Kurt says he’s amazed that Mark will make the commitment of having a kid.  They pitch camp in a generous two-man tent, and Kurt notes that the dog is a girl. But by now we’ve noticed that the dog, while Mark’s, seems even more bonded to Kurt already, and seems to view Kurt as a more important companion to Mark than his own wife. (Animals – at least carnivores as pets – understand all of these things.)    Mark also reassures Kurt that now everything is "fine" (so something had "happened" or "almost happened" before). They eventually find the river and wind up at a “resort” Kurt has built (that is, he has helped build, with a lot of other people -- at best) with his own hands, including two Jacuzzis fed by natural hot springs. It's odd that he has trouble finding it.

It’s not hard to guess what can happen.  But the actual climax (at exactly 1 hour in a 76 minute film) is quite subtle and understated.  It is more touching – even erotic – to show very little – and probably to do very little.  In what amounts to (just) a shoulder and (upper?) chest rub, Mark resists mildly (“what’s happening?”) and then relaxes.  That’s about it, and that’s all either man needs.  Unlike yesterday’s movie, we stay well within the PG-13 world.  This is more about longing, and the satisfaction of a need, the completion of a step in life necessary to move on to something more.  Of course, though, at the end, someone in my community would say to Kurt, "Mark went straight on you."  I've heard of this (it was a common expression when I lived in Dallas in the 80s).

Right before the "encounter" Kurt tells a story in which he had a dream in which a person appears that then appeared the next day in real life in a sensitive situation. I think that has happened to me -- prescient dreams. When someone else appears in one's dream, does the other person know?
The dialogue of both men tends to be curt and “man talk” (like Mark's “dry toast” – something almost out of Twin Peaks – oh, that was “warm milk” wasn’t it  -- then what is Kurt's "wet toast"?  Oleo, anyone?  From appearances, beanpole Mark probably doesn't have to "worry" about cholesterol, but Kurt does.).

I have to express the idea that film brings back memories of early periods in my adulthood, "relationships" or sorts with "straight" men, not going as far as even this film (although one of them was perhaps close).

Wikipedia attribution link for Crater Lake, OR picture I visited it in May, 1978.  I understand it has been one of the remotest areas from wireless service in the US; don’t know if that is still true.