"My Week with Marilyn": a young man comes of age, in the front row of the 50s movie business 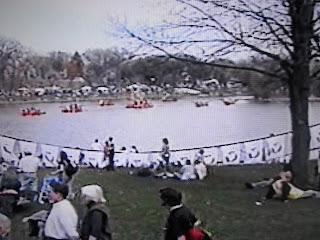 I certainly remember the heterosexual hype about Marilyn Moore (Norma Jeane Mortensen or Norma Jeane Baker) as I grew up and was introduced to the movies.  When I first heard about The Weinstein Company’s new comedy “My Week with Marilyn” (directed by Simon Curtis) based on the memoir by Colin Clark, I thought the concept to be a bit superficial.  When I saw the film, I found it was a real coming of age for Colin (Eddie Redmayne) and gave us a look at the old Hollywood-London model for movies as it was then (a follow-up on “Hugo”).
Colin does what job coaches like Tory Johnson say we must do to get good jobs today: he persists, and talks around the union red-tape, and does things for free until he is hired under-the-table as third assistant director for “The Secret Prince” which became “The Prince and the Showgirl” (I never saw that – it’s in my Netflix queue with a very long wait).
It’s not much of a secret now that Colin, with his focused people skills (he was the youngest in a large family) got Marilyn (a very compliant Michelle Williams) out of herself and able to perform in the movie.  There’s a critical point where, as he begins to get caught in the middle, he tells  her “you’re a film star who wants to be an actress”, and Laurence Olivier (Kenneth Branagh) is a director and “actor who wants to be a film star.”  That's the justifiable perception: Marilyn couldn’t remember – or even get the point of – her lines, without very personal help.  Of course, Colin (who is quite attractive – but please lose the cigarettes, even if this is the 50s) will incite suspicion and jealousy, particularly from Marilyn’s somewhat inattentive husband, writer Arthur Miller (Dougray Scott).   Colin wants to become a “writer” himself in the days when the term meant something, but he comforts Marilyn by saying that writers are always scribbling down insults.
The film was produced by BBC, Lipsync and “Trademark Films” (which displays its tm).  Here is the official site.
This might be a good place to mention a famous similarly titled indie drama, Louis Malle's conversation piece "My Dinner with Andre" (1982), which I did see twice (see posting Nov. 19).
Posted by Bill Boushka at 7:07 PM