Miller's film "I'm Glad My Mother Is Still Alive": what happens when an adopted teen finds his original mother 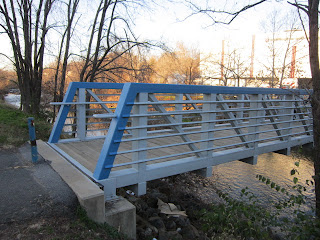 The 2009 film “I’m Glad My Mother Is Still Alive” (“Je suis heureux que ma mere soit vivante”), directed by Claude and Nathan Miller (and produced by Metropolitan Films in France), will be available in DVD from Strand Releasing Jan. 3.  I got a review copy supplied.  The film is based on a “true story” by Emmanuel Carrere.
A clue to the meaning of the title is in the use of subjunctive mood in the original French title.  At least, it suggests ambivalence.  The premise is certainly natural and compelling, and must happen often. A teenager, feeling alienated by adoptive parents as they threaten to put him into boarding school, goes searching for his birth mother who, unprepared for the responsibility, gave him up, which equals abandoning him, in his mind. The results can be unpredictable, maybe tragic.
Even at 12, the kid  Thomas (Maxime Renard) is perceptive of how things are.  He accuses his unattractive adoptive father (Yves Verhoeven) of being unable to procreate himself.  Later, at around 20, and not looking much older (now played by Vincent Rottiers), he tracks down his ragtag single mom Julie Martino (Sophie Cattani), having a younger kid Frederic, and working as a maid in a hospital.  Her manner is a bit careless and distant.  Thomas is dizzied by a world where grownups can’t follow through on anything they promise, particularly when they make babies, or even take them on.  Curiously, for a while,  his real mom actually expects him to babysit and help raise his half-brother.
The movie heads toward an uneven climax that is perhaps out of control, and unpleasant. I’ll leave it at that.
The film does have a lot of scenes showing the delicacies of childhood, the vulnerability of children when given up.  That contrasts with the opulent scenery of the opening, along the Riviera, which will soon be replaced with lower middle class highrise life.
The official site in France is here. I couldn’t find Strand’s site yet.
Posted by Bill Boushka at 6:50 PM