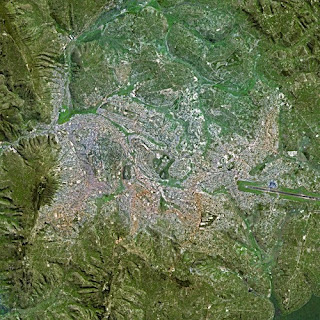 “Kinyarwanda”, directed by Alrcik Brown, makes a successor to “Hotel Rwanda”. In 1994, a the grand Mosque in Kigali becomes a refuge for victims of the civil war after the Mufti issues a fatwa forbidding Muslims to participate in the genocide of the Tutsi. Many of the refuges are peasants who could not afford the “hotel”. The title of the film refers to a dialect of a Central African language spoken in Rwanda. A Wikipedia article would make the language difficult to learn.

The film tells the story of the war in docudrama style from the viewpoint of several characters, whose lives intersect. There is a female preacher who lectures the Hutus on forgiveness – on how to accept forgiveness and repent – and on how forgiveness is sometimes more painful than the initial loss. A tagline for the film is "forgiveness is freedom".

Later in the film there is a rendering of the Lord’s Prayer in the mosque with Christians and Muslims present together.  The film does have discussion of Islam as a religion of peace.  There is a scene early where a girl's copy of the Koran has been desecrated, but the book itself is not shown. The film has horrific verbal descriptions of atrocities ("chopping"), but little physical depiction.

The film was shot on location, in full 2.35:1, and puts the moviegoer right there. The music score by James Jennings Boyd is postromantic and effective, has a lot of Maherian juxtapositions of major-minor chords.


The film comes from AFFRM, the “African American Film Festival Releasing Movement”, which should not be confused with Sony TriStar’s Affirm films, although the later company could have well considered picking this film up since Affirm specializes in religious films.


When I substitute taught a ninth grade English class, the teacher had the class watching “Hotel Rwanda” and filling out detailed video worksheets on the movie. The history of that war is quite intricate.


I saw the new film at the West End Cinema in Washington DC in a late Thursday afternoon performance, with a fair crowd.
Posted by Bill Boushka at 5:59 PM