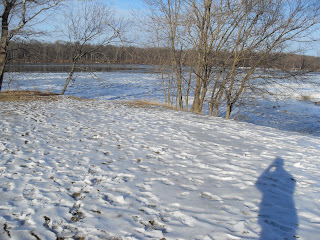 The Norwegian film “King of Devil’s Island” (“Kongen av Bastoy”), directed my Marius Holst, is, on a certain level of storytelling, a bit like “Shutter Island” (Feb. 21, 2010).  But the purpose and emotional effect of the film is even more shocking.
The movie is based on a story by Lars Saabye Christensen, and reflects what could have happened around 1915, at an island prison for supposedly delinquent boys.  Today the institution is said to be a model facility.
A new prisoner, 17 year old Ehrling (Benjamin Helstad) arrives,  to be shocked at the total regimentation of life here. No personal possessions are allowed, everything is watched, and prisoners are used for slave labor. The boys are told that their past histories do not matter, and the outside world does not exist for them (World War I had started, but it is never mentioned). One other boy, Olaf (Trond Nilssen) may be nearing “graduation”.  The island is run by a governor (Stellan Skarsgard) and a creepy assistant (Kristoffer Joner), the later of whom is not afraid to take advantage of some of the boys, whereas the governor looks the other way.
In the film's "middle", there is a tragedy. A particular boy, a victim of the assistant's exploitation, drowns himself with a rock (the sequence reminds one of Benjamin Britten's operas like "Peter Grimes" and "Billy Budd").  The governor characterizes him as a "weak" boy, and "not fit to live with other people".  That particular sequence reflects the pre-Nazi values (even though this is not Germany) in films like "The White Ribbon" (Feb. 13, 2010).
Now, the film hits the streets right after the Penn State scandal broke loose, and that is perhaps a fortuitous coincidence.
As for the film, in its dingy, wintry environment, the storytelling picks up as the hope of rebellion and escape builds up.  There is an accelerating climax, where the assistant nearly gets what he deserves.  The final escape sequence on a frozen lake, with the ice unstable, is riveting, and partially tragic, and ironic.  (It’s even more dangerous to do a fireman’s carry on ice because of the combined weight.)  This is one of those films where not many of the characters have a good outcome.
I saw the film at the West End in Washington, and the projection was done from a BluRay DVD. As a result, the screen image was cropped both vertically and horizontally for the 2.35:1 format, which would have fit the theater screen from a normal print.
The distributor is Film Movement, which concentrates on European films (other than France and Germany) exploring moral issues.  (I’m a little surprised that Sony missed this one.)
The official site is here. No question, this is a major contender for best foreign language lfilm in 2011.This is a major European film, big in production and very professionally made.
I suspect that in time there will be a documentary film about the problems with “scandals” in sports programs and school systems.  It’s a little early to editorialize on how Penn State (and Syracuse) will turn out yet.    The culture of “looking the other way” is a huge social problem, as we know from the Catholic church (which has generated some documentary film).  A few years ago, there was controversial series on NBC Dateline (with Chris Hansen – see my Books blog, March 17, 2007) about men, mostly with no criminal records, caught in Internet stings trying to contact minors.   In these cases, actual abuse did not occur.   That would also make for a good documentary examination, such as the really disturbing story of Rabbi David Kaye, convicted in 2006. I would even be interesting in participating in making such a documentary film.
When I was a substitute teacher a few years ago, there were assignments involving special education students where the possibility of having to have questionable physical contact with a student could come up.  I turned down these assignments, but I was ambushed by a couple of them.  Again, this is a topic worthy of news reporting and maybe documentary film.
Posted by Bill Boushka at 3:18 PM