Go see TWC's "The Artist" and learn something about film 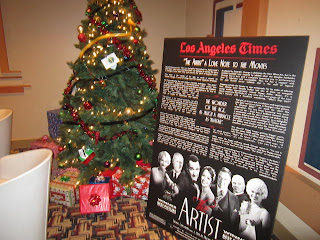 The Weinstein Company’s  and French director Michel Hazanavicius’s holiday social experiment, “The Artist” is indeed presented as a black-and-white silent film, in the original 1.33:1 ratio that used to be standard.  There is spoken dialogue only in a couple of places, as when George Valentin (Jean Dujardin) dreams that he is in talking pictures, and at the end, when he goes for “all that jazz”.

The movie also embeds some silent films, opening with an orchestra playing in a theater in 1927, the way these films were presented.  And George gets to do some kinky stuff, like drown in quicksand.
But by now the word is around, the story is about the actor’s inability to move from silent to talking, while a female idol Peppy Miller (Berenice Belo) stars in them – or perhaps the studio’s unwillingness to let him try and prove he can learn.
So when the 1929 crash comes, he is cast off, and sinks into poverty.  But in a tantrum, he burns his own celluloid, almost perishing in the fire, and only is sentient human dog saves him.  The logical question is why she doesn’t help him sooner. 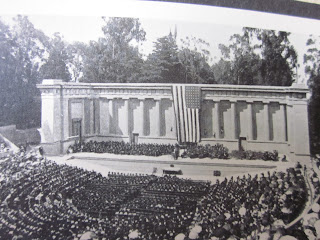 The film has a dazzling classical sound track, with some rather impressionistic original orchestral music by Louis Borce, some Ginastera, some jazz, and a climactic sequence using some of Bernard Herrmann’s 1958 score from the climatic sequence in “Vertigo”, where in this movie the plot takes on a curious contraposition. The sound track also quoted the 1981 hit "Pennies from Heaven", which I did see in Dallas then (not my favorite).
There are some other curious effects, as when Peppy “makes love to a suit”, pretending she is being embraced by the sleeves.  In a late scene where a "talking" movie is being filmed, there are separate chairs for director and "screenwriter", as if the writer had to be present for the filming. Is this what happens now?
This is, in the end, a near-tragedy about the life of a somewhat self-indulgent artist and "problem child", who may not be able to adjust to a “new world” with new modes of expression.
This film is also, like “Hugo” and “Marilyn” (also from TWC), about the movies as they were years ago, even in very early times.
I saw this at Landmark’s E Street in downtown Washington (apparently its debut outside NY and LA) on this Friday night (two days before Christmas) in the large auditorium, and it did not sell out – I had thought it surely would.  It’s unusual for a screen designed to show full 2.35:1 without vertical cropping drawn in to the old aspect ratios of the 1930s.
Here is the official site.

CNN and TWC have been offering a sweepstakes contest for consumers with a prize of a stay in LA, details here.

Other critics have compared this film to "Singin' in the Rain" (1952), which I have never seen. I've just added it to my Netflix queue (DVD only, there's no instant play, which would be a good thing given the interest).

Another comparison is "A Star Is Born" (1954, George Cukor, Warner Brothers), in the original Cinemascope, where Norman Maine (James Mason) helps Esther (Judy Garland) grow as an actress despite his own alcoholism.  I saw this in Dallas at Fair Park at a special benefit in 1984.

Second picture: My father's, from southern CA, in the 1920s, about the time of the film.
Posted by Bill Boushka at 8:47 PM