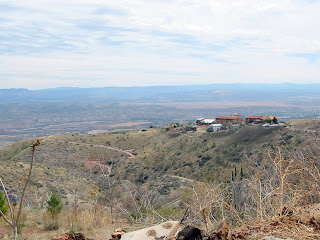 “Blood into Wine” has been mentioned by the AFTRA group “Creative America” as a small film severely injured by piracy when it introduced its DVD.   The film, written and directed by Ryan Page and Christopher Pomerenke  (from Semi-Rebellious Films and Twinkle Cash Company) documents the growing domestic wine industry in northern Arizona, and then spreads out and surveys other locations, including California and makes a sojourn to Texas.
The film starts in low-key fashion with a television interview show “Focus on Interesting Things”, the sort of presentation that my own father would have liked.  Pretty soon we’re around Jerome, AZ, slightly west of I-17 linking Phoenix to Flagstaff, and just above the Mogollon Rim (where UFO’s swarm, but that’s another discussion).  It’s at about 5000 feet elevation and not too far from Sedona.  We enter the Stronghold Vineyards (link).
That presents an issue: it can get very frigid and snow a lot  in the winter, and the northern Arizona industry has to deal with cold weather issues not found in California.
The star of the film is Maynard James Keenan, who, for all his solitary devotion to manual labor (again, my father would have admired him) regarded himself as an artist. The handsome blond man who does a lot of the grape squashing (with modern methods, not the way Lucille Ball did it) is I believe his son Mike.
The business experiences complex regulatory issues, and the film gets into libertarian territory. One of the characters wears a shirt called “Green Piece” with a pistol, arguing for Second Amendment rights, a big deal in Arizona.
The official site is here.  In the YouTube below, I believe the picture shown is actually Mike.
Wikipedia attribution link for picture of Jerome area.  My last visit to the area occurred in May 2000.
Posted by Bill Boushka at 2:44 PM