Almodovar: "The Skin I Live In": yes, the mad scientist did the worst possible thing to his "subject" 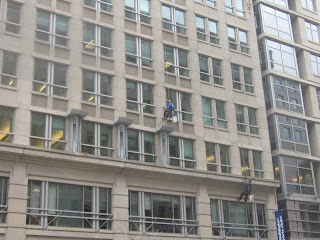 Pedro Almodovar has given us another shocker (with lots of helix-twists and layers in the plot) with “The Skin I Live In” (“La piel que habito”,  based on the novel “Tarantula” by Thiery Jonquet.  The film is set in Toledo, Spain, but it not “outdoors” all that much, giving is the garish long-wavelength colors of Spain in its sets, and the dazzling chamber music score of Alberto Iglesias.

Before discussing the rather shocking premises of the story, it’s well to rehearse other movies that make a good comparison.  Back in 2004, I had seen Almodovar’s “Bad Education” (“La mala educacion”.  In that film, a filmmaker’s former boarding school companion presents him a script of a film to be made, and as the movie goes into the script layer, shocking scandals related to the problems with the Catholic priesthood come out, and affect the making of the film.

Then, it’s well to mention a couple of other films that anticipate Almodovar’s concept here. That is, for example, “Boxing Helena”  (1993, Jennifer Chambers Lynch (story by Philippe Caland) in which an obsessed surgeon amputates the limbs of his lover, holding her captive as a freak. It was a sensation at the time, or even William Wyler’s “The Collector” (1965) where a London man kidnaps a woman with choloroform and holds her, to see if she can tempt and outsmart him.  Another film to mention here is (with a curious name similarity) Greg Araki's "Mysterious Skin" (2005).

In comparison with these, the totality of Almodovar’s precept here is pretty complex.  A Spanish surgeon (and mad scientist, perhaps) Robert, played by Antonio Banderas, has developed a synthetic skin that may become a universal cure for all burn and even skin cancer patients.  He keeps a woman, Vera (Elena Anaya), who has had the skin transplant, which has taken so well that she looks like and function as a modern young woman.  She has bonded to him ("Stockholm Syndrome") and he can "protect" her.   We learn that he was inspired to invent the surgery because of a tragic accident that took his wife.

The film is more or less bifurcated, with the second half taking place six years earlier, to “explain” how this all “really” came about.  (Godard’s New Wave film “In Praise of Love” (2001) has the same kind of backward bifurcation.) In the first half (today), Vera is attacked by a visiting rogue Zeca (Roberto Alamo) in a Spanish tiger costume for a pageant.  We’re introduced to the scheming boy’s mother Marilia (Marisa Parades), who is also Robert’s employee.

Then the film takes us back into history, to explain how “Vera” came about. Well, some people will say this is a spoiler, but the gig is probably out anyway.  Robert’s lesbian daughter had been assaulted by Vincente (Jan Cornet) – that scene is ambiguous enough to almost be consensual, if unfortunate. In the aftermath of psychiatric treatment, the daughter kills herself, and Robert seeks revenge against Vincente.  He kidnaps Vincente off a motorcycle in the woods, drugs him, and brings him back for rendition and, well, you can guess what kind of operation.  I suspect that when the DVD comes out there will be deleted scenes that play up the “shame” element (as in the film Saturday here) that Vincente will deal with in his transformation to Vera. Almodovar shows some restraint in the R-rated theatrical version.   One of the worst fears for a “man” is being made to “feel feminine” himself.

The film also hints that Robert is getting other subjects for his experiments from less than legitimate sources. Auto “accidents”, maybe?

The film is shot in conventional 1:85:1, which tends to emphasize close-ups and give the film a Hitchcock-like feel.

Here is the official site from Sony Pictures Classics.