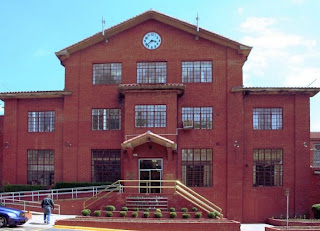 Werner Herzog’s new documentary “Into the Abyss” presents Herzog interviewing Texas death row inmate Michael Perry shortly before his final sentence in Huntsville TX (described in detail), as well as of his accomplice Jason Burkett (serving very long sentences).
The film describes the commission of what seems like a senseless spree  (in 2001)  over stealing a car from a gated community in Conroe, TX  The victims included Sandra Stotler (the owner), her son and another friend.  Herzog interviews Sandra’s daughter  Lisa in a simple apartment or home.  Herzog interviews a Huntsville warden, who had quit and given up his pension over capital punishment.  He also interviews a woman who married Burkett in prison, but cannot have physical contact with him, but wants to give Burkett someone else’s biological son by artificial insemination.
Herzog is objective and non-judgmental, in a film shot mostly in closed spaces.  The opening shot shows a plain cemetery run by the state of Texas, and then byshows the “chamber” next to a small anteroom with Bibles, and the path from the cell next door.
For me, the film brought to mind the 1995 film “Dead Man Walking” (Polygram Pictures), directed by Tim Robbins with Susan Sarandon playing Helen Prejean, comforting a condemned man played by Sean Penn.  I recall a line near the end where the condemned man expresses humiliation at his leg being shaved for a possible backup location.
In this film, Perry is described as gasping for breath for a moment, when the event occurs right after 6 PM, shortly after his last meal, ten years after the crime, when he is now 28.

The senselessness of the crime points to the lack of moral development in Perry and Burkett, as well as poverty.  The stolen car is shown later has having rotted in a lot, a tree root growing up into it.

Early in the film, a Conroe (near Houston) sheriff's deputy explains the evidence against Perry and Burkett, and his voice and manner of speech sounds just like mine in some of my own videos.  This was bizarre. I thought I was listening to myself (and not playing piano).
The film leaves the impression that capital punishment is a kind of empty justice.
The official site from IFC films is here.
Wikipedia attribution link for picture of Huntsville TX unit
The film may seem timely after another documentary “Incendiary: The Willingham Case” put Texas governor and GOP candidate Rick Perry on the spot. But in the case in the Herzog film, Perry confessed; there is no question about his guilt.
Posted by Bill Boushka at 4:05 PM