Universal's "Leap Year": romantic comedy can make mincemeat of the institution of marriage 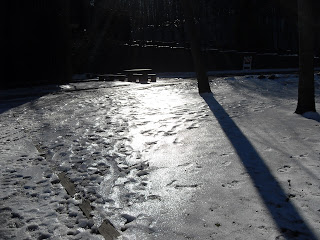 I’ve seen the “main” movie named “Leap Year” (I reviewed a Mexican film by that name Sept. 27), a romantic comedy directed by Arnand Tucker.
I’m not much on that genre, which gets to look silly in multiplex previews, but this film really does a number on the institution of marriage. The plot sounds like comic opera.
Anna Brady (Amy Adams) wants to get a marriage proposal from a cardiologist Jeremy (Adam Scott) at a conference in Dublin. There’s an Irish tradition that when a woman proposes to a man on Leap Year Day (mind you, takes the responsibility for initiative away), she’ll make her catch.
So on the road she has her comedy of errors. The plane has the oxygen masks come down and lands in Wales (near the Prince). She hires a tugboat to Ireland. She walks onto the beach to the nearest inn and meets keeper Declan (Matthew Goode).  Pretty soon, they’re on the road together, to Dublin, almost as if it were a pilgrimage.  (She has no idea how far away it is.)  At one point, they pretend to be a married couple to get a room (the owner is determine to enforce her ideas of “what is right”).
When she finally makes it to Dublin and finds her beloved, she learns the truth. He only wanted to pretend to be married to advance his career and buy into a certain condo.  You’re so much more socially acceptable in some circles if you’re married.   He has the gall to put that on Facebook.  (Ask Maggie Gallagher.)  But, on the “Way”, Declan has made his potential affections known, finally.  At least, she won’t have a husband concerned about infection control of MRSA. Imagine a 30-year-old committing his unifocal life to coronary bypass surgery, getting up at 4 AM every day.
The widescreen cinematography of the Irish coast is spectacular.
The official site from Universal is here.
Posted by Bill Boushka at 6:51 PM