"The Twilight Saga: Breaking Dawn", the fourth film of the series, is "just" a Part I: and we know what will happen to Bella 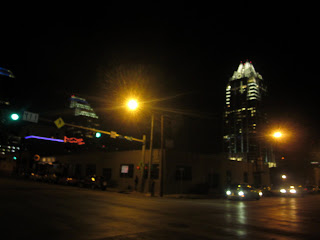 Picture: downtown Austin, TX; nothing to do with this film, but a lot of indie film gets shot in Austin.
Posted by Bill Boushka at 5:50 PM

Thought I should point this out...his name is Edward, not Tim.

Thanks, fixed. I don't know where I had the false memory. There is a character Tom Cullen (not Tim Cullen) in Stephen King's "The Stand" (itself a TV movie series in the 90s). Maybe I mentally scrambled the names and didn't notice -- it's Edward on imdb, too.