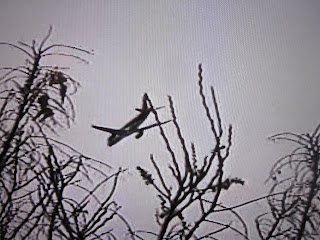 Hollywood (even its indie offspring) usually isn’t very interesting in realistic portrayal of the CIA (outside of documentaries, that is).  Summit Entertainment and DC Comics are no exception with the thriller “comedy” starring a bald Bruce Willis as Frank Moses in “Red”, an acronym for “retired, extremely dangerous”.
Frank is retired and lives a bucolic life on what looks like Long Island, at Christmas time.  (Actually, they made the movie in Louisiana and Toronto.)  He chats with his “girl friend” Sarah (Mary-Louise Parker) at his retirement processing center in Kansas City.   They both enjoy spy novels, which Frank says have nothing to do with reality.  Then, Frank is forced back to work, by other rogue retirees (REDs), who would include Sarah as hostage.
The initial home invasion scene on his home is rather impressive, as is his ability to beat it back while his house is shot to pieces. He makes a case for the Second Amendment.
Later we see some of the special effects we know from “Smallville” – rounds colliding with each other in mid-air collisions.
There’s a deep vault at Langley with the real personnel records, and John Malkovich’s RED character says, “it doesn’t exist.”
Marvin (Malkovich) has a bit of a hoarding problem, something amendable to a day with Nate.  Working for the CIA did things to people.
But my own novel manuscript (“Brothers”) has an inverse idea.  A 30-ish many with a family, ex-military and now a high school AP history teacher suddenly needs a lot of well-prepared subs when the CIA hires him for a bizarre mission that brings him into touch with a gay college student who will, yes, bust up his marriage, but also bring him the evidence that “angels” are about to force society back into a big contraction.  But he never is “chased” or put into physical danger himself – although later his family is.  He actually has lived a normal life despite his subterranean urges. I can see that in the book I need more substance to the events that drew him back.
Robert Schwentke directs this film, with this official site.
AMC Theaters, which heavily promoted the 2010 film (and usually shows Summit features) offers this interview with the director.

Summit now uses an impressive musical trademark (with impressionistic modulating chords) on its DVD's, to accompany its pyramid trade dress.
This film would seem to have nothing to do with the film "Red" (or "Rouge") from the "Red-White-Blue" Colors trilogy by director Krzysztof Kieslowski from Miramax in the 90s.  But in that "Red" film, a retired judge spies on people, drawing them and leading a mini-Titanic on the English Channel.
Posted by Bill Boushka at 8:04 AM