"Our Home: Astral City: A Spirtual Journey" -- big Brazilian film about the afterlife from Strand (and Fox and Sony) 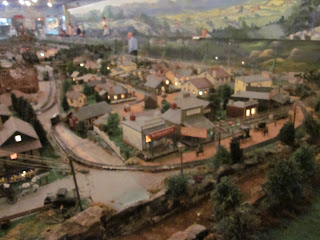 Strand Releasing will release the DVD Dec. 6 (prebook Nov. 8) of “Our Home: Astral City: A Spiritual Journey”, from Wagner de Assis, in Portuguese with subtitles, based on the book “Nosso Lar” (“Our Home”) by Chico Xavier (with medium Andre Luiz, as the film's protagonist).  The Brazilian film is released with 20th Century Fox (Searchlight)  and Sony Pictures  handling overseas distribution.  Strand did well to pick up domestic rights to this ambitious and big film; ordinarily, you see something like this on something like Sony Pictures Classics.  Hopefully, some theater chains (AMC  and Landmark) will offer extended digital projection (the film requires 2.35:1 aspect).  The main production company was Cenetica.

In the view of Xavier, the afterlife consists of cities (that look rather like Disney Epcot) suspended in the stratosphere above various places on Earth.  When a wealthy but emotionally limited Brazilian physician Andre Luiz (Renato Prieto) passes away from a lifestyle-related cancer, he “comes to” in a decrepit wasteland ("Umbral"), surrounded by failed people.  But soon he is rescued and taken to “Nosso Lar” (although he learns he is viewed as responsible for losing his own life when he didn't have to).  First, he is treated in an infirmary, by kindly male nurses (there’s a hint that they’re gay).  One particularly attractive nurse (Fernando Pinto) heals his gaping surgical abdominal wounds with a laying on of hands, and then offers him “soup”.  Hungry, he takes the next patient’s soup, too, and the nurse childes him “no swallowing” (as if “no touching yourself”). It’s a ruse.

Pretty soon Andre is mixing with others and figures out the religious hierarchy of priests (rather like The Great White Brotherhood, with some Vatican hierarchy thrown in) that run the City-state, and gets the lay of the land. People live in Texas-like tract homes, decorated in garish colors (especially blue); Nate Berkus would probably approve.  The whole city is on an attractive plateau (perhaps set in the Brazilian Highlands), with vegetation resembling California when irrigated.  You can’t leave without permission (when one distraught woman tries to go back, the film shows us a bit more of the lay of things, and the disappearance of color).  The walled city sort of reminds me of the replica of “Salem” in “Days of our Lives” in 2004 (which was on a moated island).  There is another infirmary that is less nice, in a sort of catacomb, and there is a computer center for communications, equipped with what looked like MacBooks.  When you go online, you see the equivalent of Facebook’s TimeLine (without Zuckerberg’s trademark) of your own life played on the monitor for you.

Finally (after encountering his own mother, who reignites his faith in his own humanity), Andre will go on a mission, to see his family, not realizing ten years have passed and that his wife has remarried, and that his fine son is in medical school.

We’ve had other movies depicting the Afterlife (“What Dreams May Come”, “Reviewing Your Life”, even “Inception” if you want to count it), but this may be the first film to make it a literal place with a real geography.  Another point: in the Afterlife, people still have bodies, which must be copies of the bodies they once had (that would be decaying in the ground in our reality); otherwise, why would the Astral City need infirmaries (even hospitals)?

I've sometimes wondered (at age 68), if I find myself in a dream that I can't leave, does that mean I'm passed?  I have dreamed about being in a kind of barracks, finding empty rooms, setting up camp, and then gradually encountering the people across time -- and then seeing the extraterrestrial vegetation outside.  In my dreams, nobody owns a single family house; everyone lives in a compound of some sort, and there is usually a monorail or subway.  Sometimes you can take a train to the "City" which in one of my dreams was called "New Baltimore". In my dreams, certain people have children even in the afterlife; others may not.  Time across decades is compressed, as it is in this film; but you can't change the past.

Remember, though, weaker “souls”, those who could never do real work or accept real relations with others, never make it out of the vile purgatory.

The film has an interesting chamber orchestra score by Philip Glass, and uses the Beethoven Moonlight Sonata (where it seems a little trite) and the Haydn C Major string quartet (very effective here).  The style of this film anticipates Lars Van Trier, and makes me anticipate "Melancholia".

A leaflet called "The Other Side", "A Twelve Tribes Freepaper" writes that "When a person dies, the physical body, the material part of him, is buried in the ground and decays. But the immaterial part goes to death. That is the soul -- the unseen part of a person." When a person dies "he goes to a place of waiting. receiving either torment or comfort based on his life's deeds... Although death lasts long, it is not eternal."  The paper calls Christ by the name "Yahshua."  I recall, back in 1983, driving back home to Dallas on a Sunday night, passing through Commerce, TX and hearing a pastor say (and warn), "when you die, two angels escort you to judgment. At first, you don't realize what has just happened."
The official Facebook site is here. Strand’s official site is here.

Strand sent me a review copy.

This is a great wake up call! Great movie!