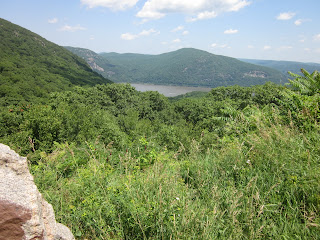 For Halloween, before going to a Monday night party, I went to Landmark E Street early to see the new thriller from Sean Durkin (Fox Searchlight Pictures), “Martha Marcy May Marlene” (it’s hard to memorize all four names in the right sequence, as in a neurologist’s office, maybe).
Elizabeth Olsen plays a young woman Martha on the lam from a commune in the Catskills, taken in by a family-centered sister Lucy in northwestern Connecticut (Sarah Paulson, who looks a bit older).   (Indeed, “because we’re sisters”.)We get a good foreshadowing (screenwriting students, take note) of what may happen early (in a scene previewed), sitting by a lake, Martha asks Lucy how far they traveled when she was rescued, and Lucy answers “about three hours, why?”
Martha was called “Marcy May” in the cult, which answered the phone with “Marlene”. All this helps with the titular memory exercise.
Lucy has recently remarried a handsome British businessman Ted (Hugh Dancy), who has to bear the risk and intrusion of these legacy family matters.  Martha still wonders why people have to make money and have possessions. Back at the cult, there was only communal living and sleeping (and sex by rather polygamous men), and chores – and “existing”.  Why ask for more?  Here, there was no pretense of God’s calling (a grizzled John Hawks plays the Jeffs-like king). There is, as we will learn, a murderous nihilism.
The film was surely shot before the “Occupy Wall Street” movement, but well after the horrific 2007 home invasion that occurred in Connecticut.  All of this sets some boundary parameters for the story.
There is something really horrible about the mid-film invasion scene (more subtle than that in Michael Haneke’s “Funny Games” to be sure). Here, the roamers “don’t want anything at all”.  But they don’t want you to have anything either.  Understand the nihilism?  Just live.   Then, when the film ends, life just stops.  Two hours have passed and you’re not expecting the termination yet.
The film merges the present (Connecticut) with the recent past (New York State, the Catskill farm, looking like the same place) in flashbacks, with no obvious technical gimmick (like changing hue or color) to identify the life in the past. Sometimes you’re not sure where she is; in her mind, both scenarios merge.
Here is the official site.
Here is Landmark’s interview with the director.
The director says he was “looking for an idea” in this interview for Sundance.
.
When I was a patient at NIH in the fall of 1962, there was a female patient who seemed lost the same way Martha does.  It all comes back from long-term memory.
Posted by Bill Boushka at 7:55 AM