"Hugo": Martin Scorsese gives us the early history of film from the eyes of children -- in a "G" film for grownups 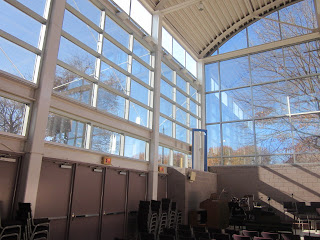 There’s not much question that  UK-French film “Hugo” will be up for Best Picture for 2011.  It is a near-children’s film directed by Martin Scorsese, produced by GK Films and John Depp (Infinitum Nihil) in London and Paris, and distributed in the US by Paramount (was this Paramount Vantage?  -- although $170 million is a bit much for independent film).  It’s based on the book “The Invention of Hugo Cabret” by Brian Selznick.
It’s pretty well known now that this movie is an artist’s history of early film, specifically the work Georges Melies (Ben Kingsley), and “A Trip to the Moon”, a wonderful animated short, is shown in entirety.  (In that film, Saturn appears, so you wonder if the “moon” is really Titan.  The animation makes it look plausible, even in the 1930s.)
The whole story of Melies is almost tragic.  He almost invented the cinema, which dazzled audiences with approaching trains. After World War I (shown in clips), the public was concerned with real life and real hardship (remember influenza, too), and not too easily entertained.   His movie business, which had replaced his interest in mechanics and gadgetry (he had invented a kind of robot called an Automaton) died financially. He sold most of his celluloid stock to survive.  Or he thought he had sold it.
But the story is told in apposition through the eyes of a boy Hugo (Asa Butterfield, who at 13, will certainly find this movie a career lauch).  He has lost his inventor father (Jude Law) to a tragic accidental fire, and  then even his mean uncle, and lives in the Paris station, fixing clocks, trying to escape the station master (Sascha Baron Cohen).  One day he brings a notebook for animation to Melies, who thinks he had stolen it and threatens (illogically at first) to burn it.   But he meets tween Isabelle (Chloe Moretz) in Melies’s household. Her own intellectual preciousness helps launch Hugo on an adventure in which he plays gumshoe and solves a number of problems, finding out who the embittered Melies really is and enabling the kids to recover many films thought to be lost.  Isabelle has a great line -- saying that people die if they lose their purpose.
The film gives us a look at technology and intellectual property a century ago, with issues (innovation and copyright) surprisingly relevant to some of today’s debates (as on copyright infringement, as with Congress’s controversial SOPA bill).
The CGI is out of this world, recreating Paris in the 30s, and the scenes involving steam trains are particularly sensational.  There is a dream sequence involving a catastrophic train wreck, followed by another dream where Hugo examines his body and finds it has turned into a robot. Technically, the film is overwhelming.  Despite the economic problems in Europe, it doesn’t seem as though the film business there spending money for sensational filmmaking.  The film is presented 1.85:1, maybe to facilitate showing of the embedded silent clips, but I would have preferred the full 2.35:1.
I saw this at the AMC Courthouse in Arlington VA, in a large auditorium, and a large Thanksgiving night crowd, mostly adults.  (This movie, though PG – almost G – really is for grownups, too -- especially intellectual property lawyers.) The theater has a very wide curved screen and does not crop vertically.  At AMC’s newer Georgetown and Tysons, it crops vertically, so that 1.85:1 films (like this one) actually look larger.  I recommend seeing this film in a new facility if possible, and in 3-D, which is used in a very natural way, without exaggeration.
Here's the official site. I can almost predict a Best Picture win for this film -- 5 stars.
This may be a good place to mention a 1992 Fox documentary "Visions of Light: The Art of Cinematography" which was shown to a film class in high school when I substitute taught.  Actually, English and drama teachers are going to like to show "Hugo" too.
Picture: inside MCC Washington DC, which resembles the "glass house" studio depicted in the film.
Posted by Bill Boushka at 8:27 PM