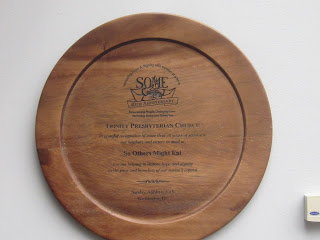 ABC, on Thanksgiving Sunday, presented Hallmark’s “Mitch Albom’s ‘Have a Little Faith’”, based on the Detroit sportswriter’s book of the same name.  Compared to some other faith-based films, it seems a little bit didactic (after all the action in “Courageous”, Nov. 10).  It's directed by Jon Avnet ("Righteous Kill", "Fried Green Tomatoes").
Mitch (Bradley Whitford) is asked by an aging rabbi Albert Lewis (Martin Landau) to write his memoir or eulogy – and it’s a bit deal for a writer to be so “commissioned”.   The rabbi is aging and says he is approaching his earthly end, but is still active and sharp mentally.  Along his journey, Mitch meets a man from a Detroit homeless shelter.  After Mitch spends a night there (it’s much more crowded than Army barracks), he meets the ex-con pastor Henry Covington (Laurence Fishburne) who runs it, as well as an new congregation  (the “I am my brother’s keeper Church”) in an old downtown Presbyterian Church building with huge holes in the roof.  The writer’s journey into real faith starts.  The early part of the film tells Covington’s back story of crime in NYC. But the connection to Albom is not made clear until the film's middle, which to me seems like a structural flaw in the screenwriting.
The movie makes a lot of simple plays on words: the difference between “books” and “action”; later it depicts Covington as having been told by his father to “take what he wants.”  Lewis notes that babies are born with their fists clenched, as if to “take”, but a person’s hands open as life progresses.
Mitch will say he is not “better” than the people in Convington’s world, or even smarter, just luckier. Knowledge itself is not the goal, but the process of searching for it is what matters.  He starts out and stays within the perspective of his own Judaism, while embracing Christianity at the same time, particularly at the end as the church is repaired.
Here is Hallmark’s site.
Posted by Bill Boushka at 8:24 PM

I very much enjoyed "Have a Little Faith"! Yes, I agree it seemed a little slow in getting to the real connections but I stuck with it (I'm a Detroiter and love Mitch Albom!)and by the end I was moved to tears! Very inspirational with a lot of good messages for any season!