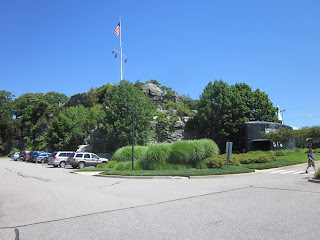 Wolfe released its new controversial drama “The Green” about the perils of a gay male teacher on Nov. 22.  I’m sure that the distributor and film production staff, when scheduling the release of the film, had no inkling of what would suddenly unfold at Penn State.  But as I watched the film, and the accumulation of hysteria around a falsely accused  (fictitious) teacher, I felt a definite chill and sense of panic myself.

The title of the film is an understatement.   Forty-somethings Michael Gavin (Jason Butler Harner) and Daniel (Cheyenne Jackson) have left New York for a “green” life in suburban Connecticut.  Despite the recent legal changes, they’re not quite ready for formal gay marriage. Michael is having contractors fix up an old house.  Michael teaches  (high school) English and drama at a private Yardley Academy, which in the inner halls isn’t so different from a typical suburban public school.  My own father, back in the 50s, used to ask “Why would a man want to teach English?” – a prejudiced question, as my 10th grade English teacher  (a football star) was actually one of the best I had.  It seems that Yardley has its own share of troubled kids, and one of them, Jason (Chris Bert) is attracting attention by skipping class and failing classes while still focusing on his own world. We don’t know for a little while how desperate his family situation is.  His redneck father is suspicious of everyone, including Michael.  One day, some other kids try to bully Jason, and Michael breaks it up, with due assertiveness.  That’s the right thing to do, we say.  But Jason says he is picked on because Michael pays attention to him, and pretty soon Michael is called into the principal’s office and then arrested on phony charges of an “inappropriate relationship”  with Jason.

Enter the hotshot lawyer, a British woman (Mary McCann).  She minces no words, concluding that this is a shakedown by Jason’s family for money.   She says, “you’re a gay may teacher, and a student has made an accusation, and that’s all that matters.  The best I can do is prevent a conviction”.  Michael is out on bail (not shown), put pretty quickly the prejudice and anger from the townspeople (with no facts, only rumor) is manifest.  His contractor quits, leaving his open roof open to an approaching hurricane. His lover Daniel starts to fight and is about to leave him.  A minor gay character from the local pub Glenn (Michael Godere, who looks ten years younger than his imdb age, probably always) sometimes tries to smooth things over.   The police confiscate his lover’s computer.  And so on.

In any good screenplay, the protagonist has to draw on some hidden character resource to solve his problems and provide the film a climax. In this movie, the solution will come from a series of coincidences involving the storm, forcing Michael to confront Jason’s father. The film bypasses what could have been a complicated and interesting courtroom drama – that would have made another movie.

The film could be compared to Lionsgate’s “Student Seduction” (2003), discussed here May 4, 2010, in which a female chemistry is accosted by a male student and then accused. In that film, the prosecutors and court system plays much more into the story.

Then there is my own screenplay short, “The Sub”, which I have worked in a “layer” of a bigger screenplay for my “Do Ask Do Tell” film.  In that film, an older gay male teacher, call him “Protagonist”, has a cardiac arrest at school and a precious music student saves him with a defibrillator.  Protagonist is an amateur composer himself, and this leads the student to invite the teacher home. The teacher, after recovery, goes (unwise). Soon the student has tricked him into helping him make a fake ID to get into a gay bar.  By “happenstance” the student appears at the same time on a weekend night as Protagonist, and they dance. Soon Protagonist is arrested at school. His own lawyer is also blunt and not too sympathetic (just as in this film).  The district attorney wants to offer him a “deal” of no jail if he will register (as a “sex offender”).  But then Protagonist dies of another heart attack, but the student performs his music.

Here’s the official site.  This effort, directed by Steven Williford and written with Paul Marcarelli, is important viewing (for adults), but perhaps a bit painful to watch.  I have to admit that I didn’t “like” the characters as much as I did in some other LGBT films.  I hope Wolfe Video and Table Ten Films can get it into theaters (like Landmark or AMC Independent; I simply purchased it from Amazon).   It is shot in full 2.35:1.

It's important to note that the film is almost pure drama (it seems like a stage play at times), probably in the PG-13 area.  There is almost nothing explicitly shown in the film.