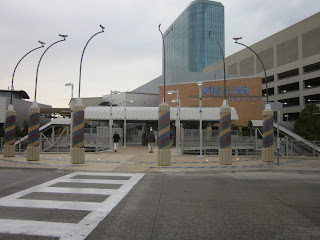 When “The Descendants” (dir. Alexander Payne, Fox Searchlight) started rolling, the theater had just shown a Wagnerian preview of “Melancholia”, and as the movie progressed, I felt as though Van Trier could have directed this and wiped out the characters’ personal problems with another rogue planet.

The film starts with a woman (Patricia Hatsie) on a speedboat, and that’s the last time she will be conscious.  The real estate lawyer Matt King (George Clooney) starts talking about life in Hawaii, that it’s not permanent vacation.  True, middle aged business executives (male) feel OK about parading in their shorts.  Soon the narration stops and the acting begins.  We quickly learn that his wife is comatose, and pretty soon Matt gets the news that nothing can be done, and that according to her living will, life support must stop.

Matt now has to be a single parent father to his two daughters, Scott, 10  (Amira Miller) and Alexandra  (Shaileen Woodley, 17), a kind of bad girl at a boarding school.  And pretty soon it hits the fan, as Alexandra tells him that his wife had been cheating.

Most of the rest of the plot deals with Matt’s tracking down of his rival, who is tied to his business dealings with the real estate trust.  To avoid spoilers, one can just say that the plot solves the problems originally and somewhat quietly, but closes the loose ends.  There’s a refreshing point that some of wild land ought to remain so rather than be turned over for greedy overbuilding. Matt also is always questioning the morality of a system of lineage supporting inheritance of unearned wealth.  He says he wants to leave his daughters enough to do something, not enough to do nothing. The movie provides a bit of a crash course in trusts, for those who may find themselves involved in administering those of their parents or spouses.

The script comes up with punchlines to keep the slow moving film funny. Alexandra has a sidekick boyfriend Sid (Nick Krause), who shocks us at first with his social insensitivity (particularly in a scene involving another supporting character with Alzheimer's Disease), and gradually gains our confidence, almost becoming a critical lynchpin for Matt's being able to solve his problems at the end. That's good screenwriting!

For me, of course, the point is how easily the whole life of a man like Matt can be challenged by a spouse’s infidelity. He had to deal with the idea of not being man enough to have kept her.  And in his world, family and business, with social support and manipulation, are all tied together.

Very early, Matt criticizes his youngest daughter for sharing pictures of her comatose media, and lectures her on what is private within a family. This sounded like a lesson for social media users.  He's always telling Alexandra to look after her younger sister -- an indication of his lingering prerogative as a father.

The scenery of the film is lush.  I do remember seeing the musical of Michener's "Hawaii" as a college student, and I remember the line about the importance of getting married.

Of course, I avoided that entire world until certain interests tried, over the past few years, to drag me back into playing “their” game.


I saw this film at the Angelika Center at Mockingbird Station in Dallas.  Does this complex replace the old General Cinema Northpark?
Posted by Bill Boushka at 5:57 PM