"Weekend": two men who meet in a gay bar actually talk to each other -- extensively 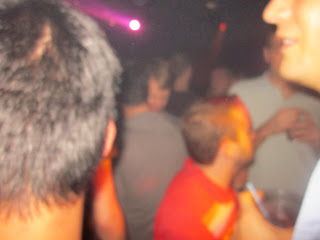 The new hit gay British drama "Weekend" starts with a house party in the straight world, but after some rowdiness, Russell  (Tom Cullen), who normally works as a lifeguard, heads for a gay pub, all in Nottingham, England. He meets Glen (Chris New), and, lo and behold, they spend a weekend actually getting to know one another, a lot of it in Russell’s cookie cutter high rise flat.
Some of the conversation hinges on the existential questions over being willing to commit at all. At one point, Glen says “I don’t want a boy friend.”
The two men (both late 20-somethings) don’t satisfy any particular visual fantasies, at least for me. They are far from perfect.  I wouldn't say they are polarized opposites (in terms of "The Polarities" it's not easy to classify either one).  I’ve seen more “suspense” in intimate encounters in other films. Yet, the movie sort of answers a question, when I see conversations in the clubs myself, what are people talking about?  Pretty mundane stuff, some of it, and the tobacco and drug use can be "depressing".  But, as the hours go by, the level of communication really picks up.
A few of the location shots are remarkable. There is a place called King’s Walk that looks like it came right out of Harry Potter.
The film, directed by Andrew Haigh, is distributed by Sundance Selects and was produced by The Bureau and EM Media (Midlands).
Here’s the “official blog” site.
Here is the SXSW trailer.
The film reminds me of a famous 1999 film from FineLine, "Trick", by Jim Fall, where Christian Campbell plays a likeable pianist who meets someone on the IRT, and tenderness ensues (over a Beethoven Sonata, but not the HammerKlavier.)
Posted by Bill Boushka at 6:41 PM