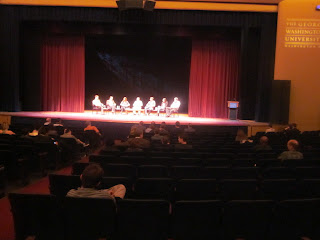 Wednesday, Oct. 12, I went to a pre-opening of Reel Affirmations 20 (program guide pdf link), a panel discussion at George Washington University’s Lisner Auditorium, “Out of the Closet and on to the Screen: A Generation of Queer Film”.  Attendance was fairly light. 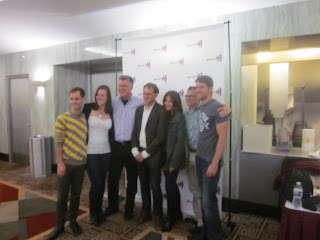 There were seven panelists:  Chris Geidner (Metro Weekly, Moderator), Bob Mondello (National Public Radio),  Michelle Clunie (from “Queer as Folk” and “Make It or Break It”), Ronnie Kroell (from “Eating Out”, “Drama Camp”, and “Into the Lions Den”, and also “Playgirl”), Brad Bell (“Husbands”), and from GWU:  Stephen Forssell and Sara Snyder. 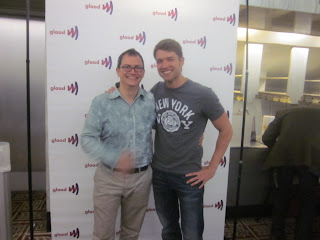 There was a general presentation of the history of the presentation of gays in cinema, which was severely repressed by earlier “production codes” (Hays)  in Hollywood.  “Some Like It Hot” (in 1959, dir. Billy Wilder (United Artists, black and white), with Tony Curtis) forced a major turning point, in practice.  (Remember “By the sea, by the beautiful sea?”).   Cross-dressing does not mean "gay" however. (Paul Rosenfels used to say, most transvestites are straight.)  I can remember moments in older films, though, like the end of “Spartacus”.  (Anyone remember some of Frank Sinatra's lines in "The Detective" in 1969? "..cut off." and later (a suspect), "he was soft, like a girl."  Real stereotypes!)
The mood changed only slowly during the 70s, so that by 1982, Fox’s “Making Love” created quite an event. But by 1993, with Jonathan Demme’s “Philadelphia” (with Tom Hanks as a PWA fired from a job), the mood was changing.  In 1994, Arthur Dong’s documentary “Coming Out Under Fire” about the military would appear, as would a couple of TV films about the military gay ban (“Serving in Silence” and “Any Mother’s Son”, followed by “Soldier’s Girl” in 2001).
There were questions from the audience.  I asked about the feasibility of a bigger film on “don’t ask don’t tell” and someone mentioned the until now obscure HBO Documentary “The Strange History of Don’t Ask Don’t Tell” which had first aired on Sept. 20, the day that the repeal took hold.  It was said that this particular film could not be in the festival because it had already aired, but the film was highly recommended.  I rushed home and found it would air on HBO Signature on Oct. 13.  I will have separate view of this film later today. 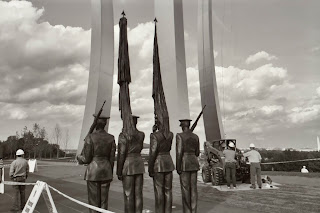 I did find, on YouTube, a number of interviews posted by “Boy Culture Dot  Com” (link), taken from another film festival screening (not sure where, maybe in CA) of the “Strange History” film.  The viewer can find these on Youtube mixed in with “Strange History” previews.   Mike Almy and Victor Fehrenbach present their stories.  An attorney says that the repeal was a team effort, and, besides congratulating SLDN and many other organizations and members of Congress for their teamwork in winning the repeal, even gives credit to bloggers (me!) and social media  (Facebook) for putting extreme pressure on Congress, the president and the courts for repeal.  The attorney warns that a future president could, on his own, probably reinstate the ban (or so could his Secretary of Defense)
The assemblage of Boy Culture YouTube interviews amounts to another short film (total about 20 minutes) on the repeal of “don’t ask don’t tell”, worthy of review in its own right.
I’ll review the HBO film on another post. Let me say, however, when checking out HBO Signature, Channel 303 in Arlington VA on Comcast, I did appreciate the crisp black and white of Woody Allen’s “Broadway Danny Rose” (1984, Orion Pictures), which I do recall seeing in Dallas. The centipede in the parade scene is particularly interesting to look at.  Woody Allen gets “mistaken” here. I also recall with Woody Allen and Diane Keaton in 1979, in “Manhattan” (United Artists), also in black and white, which I saw just after moving to Dallas from “Manhattan”.
Posted by Bill Boushka at 7:12 AM