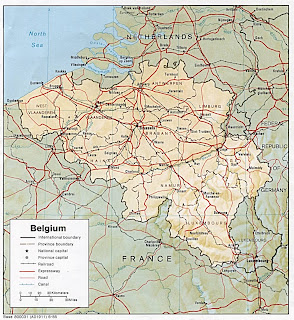 A film called “Private Property”  (“Nue propriete”), even if in French and from Belgium, ought to attract libertarians, right?
Well, this little drama, which is almost like a filmed play, directed by Joachim Lafosse, certainly is a warning to adult children who expect to inherit property.
The setup is that two fraternal twin brothers, Thierry and Francois (Jeremie Renier and Yannick Renier, probably brothers), having turned 20, are still big babies, living in their divorced mom’s (Pascale – played by Isabelle Huppert) farm-estate somewhere near the Luxembourg border.  The father Luc (Patrick Descamps) sends alimony on condition she take care of the boys.
We see them taking baths together and washing each other’s hair, and then playing ping pong.  When Pascale meets a boy friend  Jan (Kris Cuppens), who wants Pascale to sell, turn the boys loose, and start a business, the boys feel threatened.  The “property” is to be theirs, with no work to earn it, right?
It gets worse when the mother leaves anyway, leaving the boys to turn on one another.
The film is quiet, with no music during the credits and almost none until the end, when a bizarre arrangement of the fourth movement “Primal Light” from Mahler’s Symphony #2, with a demonic violin replacing the voice part, sooths us as the camera moves away from the estate, having documented a tragedy.
Maybe Ayn Rand was right. Those who inherit property without earning it or deserving it will just waste it and lose it.  The Radical Left (even the "Occupy Wall Street" protesters) which objects to inherited wealth, might like this movie, too.
Here is the official site.
The 2006 film was distributed by New Yorker Films and now by Netflix Red Envelope.
Wikipedia attribution link for map of Belgium. http://en.wikipedia.org/wiki/File:Belgium.jpg
Posted by Bill Boushka at 7:58 PM

I actually loved this film for the simple way it was shot. I also loved Jeremy Renier who happens to be one of my favourite actors!