"The Ides of March": You need not beware the date now, but Gosling prevails again 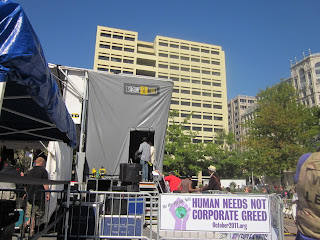 Ryan Gosling (don’t double the “s” in his name) is certainly a gravity point these days, with the second movie this fall where he plays someone super manipulative and assertive. Goslng, remember, is one of a clan of young actors from Canada and northern states in the US (Minnesota particularly) that we think of as nice and gentle. Not always. Now, the 30-year-old actor is rolling up wins like a Major League Baseball starting pitcher in the playoffs.

In “The Ides of March” he plays a young political operative, Stephen Meyers, sub-managing a Democratic candidate Mike Morris (played by director George Clooney) as he struggles to win the Ohio primary which would help seal the nomination.

The movie, based on the play “Farragut North” (named after a DC Metro Station near K Street) by Beau Willimon, really doesn’t resemble Shakespeare’s “Julius Caesar” (which we all read and answered final exam questions on in tenth grade) as much as I expected. (The best film of that play, by the way, was from MGM in 1953, in black and white, directed by Joseph Menkiewicz.)

The early part of the film shows Meyers coaching his candidate on debating the issues, and this gets really interesting, as it gets into territories I cover a lot in my own blogs (and especially in Chapter 2 of my first “Do Ask Do Tell” book). There is a sequence on how to argue for mandatory national service, with the government paying for college education upon completion. In a formal debate scene later, Morris (Clooney) argues that, if elected, ten years later there will be no more internal combustion engines manufactured in the US. The way to bring the troops home is not to depend on foreign oil. It’s that simple, and so far, that politically (and corporately) undoable. He also says that wealth should not be redistributed by government to the wealthiest Americans. I have a feeling that both Clooney and Gosling believe (personally) what the Governor Morris character says.

Meyers also says that, as president, he is a member of no religious affiliation, but will defend everyone’s right worship or not as he or she pleases. (Will Mitt Romney say that? “Nice try.” How about Rick Perry?) There are echoes of talk over using immutability in arguing for equal rights for gays. (I suspect the film was shot before the ultimate demise of “don’t ask don’t tell” was clear enough to the screenwriters.)

Pretty soon, however, the commitment to “moral truth” falls by the wayside, to more conniving than we saw in “Social Network”. The plot may be a bit of a set-up (like what can be sold in a bar in a dry state). Meyers has been working for Paul Zari (Philip Seymour Hoffman), who smokes (outside) and is preceded when he walks by his pot belly. One day, he gets a call from the opposing campaign manager Tom Duffy (Paul Giamatti). Merely agreeing to meet with him is dangerous, and that generates the rest of the story. Who can manipulate the system the most, and who will fall? Part of the plot involves the illicit pregnancy of girl friend Molly (Evan Rachel Wood). Pretty soon, we learn that the lives of these characters seem to revolve around having cushy careers in politics for life.

Then, there is the rogue reporter Ida Horowitz, played by Marisa Tomei. She tells Stephen she was informed about the “circumstances” by “a bird”. Call it a mole. Pretty soon the real motives come into focus. But Ida’s role also makes the “career” of political journalism in establishment papers a job of politicking, rather than writing and publishing “the truth”. What would happen if she were an independent blogger?

I saw this film in an ETX (Enhanced Theater Experience) in at the AMC Tyson’s corner (link). I can’t say it was significantly better than “ordinary” digital projection. (The theater chain charged me about $3 extra for the luxury in the ticket price.) The film, shot 2.35:1, was shown cropped top-to-bottom (at the newer AMC’s, 1.85:1 films actually have more square footage for projection). But Ryan Gosling himself was presented in a curious way. He always has a scruffy 5 o’clock shadow despite the business tie and dress. He looks virile in the bedroom scenes (plot hint), the camera wandering onto hairy legs a couple of times.

The film was shot on location in Michigan (the Detroit suburbs), and in Cincinnati, Ohio -- looking like March in the midwest, rather barren with snow in some scenes -- with a critical "drop" scene across the river in Covington, KY, looking at the skyline.  Michigan and Ohio can both use the jobs generated by movie making there.  Let's see more of it.

I do chuckle at the Time Magazine cover suggesting Ryan Gosling run for president. (Sorry, too young now, and not born in US.)  Of course, in December, Time depicted Mark Zuckerberg (not Bill Clinton) as President of the World.  The film also reminds me of approaches made to me to get involved in partisanship (would I host an LCR social in my "home"?); In Minnesota in 2000, I might have actually run for the Senate as the Libertarian Party candidate.  Could Ron Paul run for president for the LP now?  Another thing, the movie makes Democrats look even more conniving that the GOP (the 2000 election, and Watergate back in the 1970s notwithstanding).

There is, to be sure, a dark way of interpreting Stephen's conduct toward the end. Why does he wear gloves? Is this a "Clue Game" after all?

The official site from Columbia and Cross Creek Pictures is here.