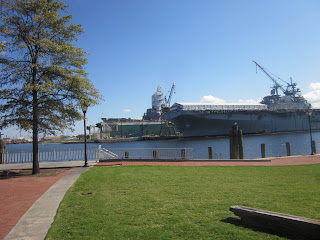 Occasionally, a historical classic film comes along that seems to tie together some threads of recent life. Such is the case with “The Battleship Potemkin” (“Bronenosets Potyomkin”), originally a silent film made in 1925 by director Sergei M. Eisenstein, but it was restored in 1976 by the Soviet Union; the DVD is now released (through Netflix) by Image Entertainment.  Apparently the film has also been distributed by Kino.
Mutiny has, of course, long been a subject of literary interest, most notably British composer Benjamin Britten with his opera “Billy Budd” (drama blog, Feb. 27, 2008). This film, however, is not very concerned with individual character conflicts, even as it presents the crowded conditions of Naval life (and the hammocks for bunks) as well as any “political” film today, given recent battles over “don’t ask don’t tell”.
The story is familiar, if detailed. After a minor disciplinary incident with a particular sailor, cadre goes goofy. Some soldiers rebel at being served meat with maggots. Eventually a rebellion ensues that spreads to civilians in the home Black Sea port of Odessa. It even spreads, at the end, to other ships.
The fleet had been returning from a humiliating defeat in the Russo-Japanese War.
An “Occupy Czarist Russia” revolt does indeed develop and spread, as if this were an explanation for how Bolshevism came about.  The populist uprising becomes unstoppable.
The film (at least in the 1976 version) uses the symphonies of Shostakovich for the entire background. It opens with the first movement of the 5th Symphony, and ends with the martial triumph at the end of the symphony.  I always enjoyed this work as a young man, even if I knew the triumph was formalistic and hollow, and the “meaning” was wrong (or at least politically incorrect).  In between many other symphonies of Shostakovich are worked in, particularly the 10th, 11th (year 1905), and 4th.  There is a night scene on ship with the eerie, Mahlerian close of the 4th Symphony playing in the background.
The  1981 Paramount film “Reds”, directed by Warren Beatty, comes to mind. In that film, an American journalist is taken up by Communist idealism during the Russian Revolution (the opening of Potemkin says that “Revolution is the only legitimate kind of war” and later has the line “One against all”, definitely not from Alexander Dumas (previous review).  Just before the intermission of Beatty’s three-hour film, the “Communist national anthem” gets played to great stirring effect, again with the wrong meaning.
OpenFix has the complete film on YouTube.
Posted by Bill Boushka at 6:42 PM