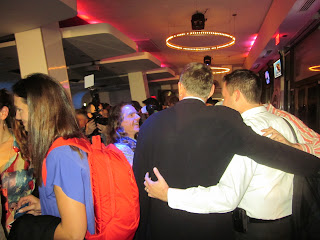 The gay drama “Whirlwind”, directed by Richard LeMay based on a story by Jason Brown, comes across as a stageplay on video, and seems like an amalgam of “Iceman Cometh” and “Boys in the Band”. No, Drake (David A. Rudd) is pretty much “The Walkin’ Dude” (for those familiar with Stephen King), and his mission is a little more than to “walk into a bar”.  He busts into a closely knit group of gay men in the Big Apple and gradually tries to shred their relationships and any since of commitment, with the total “Ayn Rand” message: “Take Control”.
Early in the film, when in a bar (the disco scenes seem scaled back), he berates one of the men, an African-American, who had lost a lover two years before to an auto accident (maybe it was getting struck on a bicycle, as reckless  bike behavior is said by bloggers to be a big issue in the Apple these days, seriously), for not dating or tricking again.  The guy asks, “have you ever lost anyone that you LOVED.”  Well, the Dude has just been jilted (because, as Erika tells a fictitious MZ in “Social Network”, “you’re an a.h.”), which is not the same thing. But the other man says, “You should know not to say that.”  The verb “know” (savoir) is interesting here.  But Drake immediately steals another man's "catch" and takes him home; the "mark" is played by a particularly attractive blond actor who doesn't appear again.
Drake is more attractive, by conventional standards, than most of the other men, in the sense of having the “external trappings of a man”. He is always going around with his existential, negative talk, telling the other men don’t have much time left in their lives, and that (gay)" relationships aren't meant to last" (long). As this film was made in  2007, it seems dated in the world where gay marriage is debated.
The other men are planning a “party” (hence BITB), and Drake’s crashing it, most unwelcome, will lead to the climax of the play-film.

The DVD includes selections from the table reading. That clip starts with the "relationships not meant to last" scene.
Here is Wolfe’s official site.
Posted by Bill Boushka at 7:41 PM