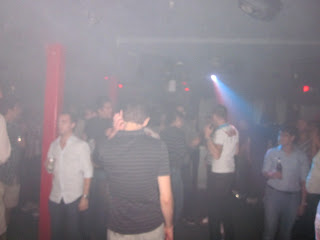 I hear a lot about circuit parties. Even though I enjoy the “customary” disco scene, I’ve never been to a circuit, probably because I came of age too early (that is, too old).
“When Boys Fly”, from TLA and New Voices, directed by Stewart Halpern Fingerhut and Lenid Rolov, is a one-hour documentary (full screen on DVD), 2002, about the experiences of three men (Brandon, Tone amd Jon), principally at a White Party in Palm Springs. [A friend, associated with the fight against “don’t ask don’t tell”, actually wanted me to consider buying there; home prices are really depressed, I’m told.]  I was bemused at one point because I saw a hotel by the Pacific, so there were other parties mixed in.
The early part of the movie did focus on Brandon. His parents discuss him and mention that he is an only child and that may have made him distant from other people. Maybe there is the slightest touch of Asperger’s in the character (last film).  He might tend to be more interested in watching.
Some of the stereotypes of the circuit party world are depicted – the drugs, which aren’t as universal as everyone thinks (but a character OD's in one black-and-white scene toward the end).  Men certainly have a good time without them.  The men tend to be shirtless (and [artificially]“smooth” about 75% of the time) before the dancing starts at all, which is the opposite of the case with a “conventional” disco party (picture).  And people travel and spend thousands to go to these.
There’s a comment at the end, “gays spend time trying to decide what to do with their lives. We don’t have families, don’t have kids.” Then they got into the subject of gay friends and whether you can make these into a family group.
The DVD has a lot of deleted scenes and extras for a short feature. In one of the scenes. one of the men says he cannot be friends with someone but could be a lover. Another scene, in a motel room, has Brandon "get it" (the "aggressor" says, "you wanted a military ball" but Brandon is wearing a flashy but inviting shirt, inviting an opening).  Another scene has Brandon "coming out" to a high school coach. One of the interviews discusses Tone's having a stroke.


I would recommend another, more ambitious TLA film, “Circuit” (2001, dir. Dirk Shafer) which is long (140 min) and has a complicated story involving viatical settlements, and a kind of voyeurism more familiar to fans of David Lynch.
Posted by Bill Boushka at 8:19 PM