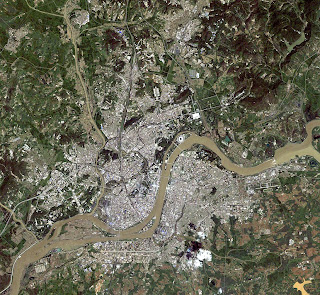 The 2004 documentary film from Kino and BBC (and Film Forum) “A State of Mind” gives a detailed look of personal life inside North Korea.
The director, Daniel Gordon, also narrates. He follows two young women (Hyon Sun Pak and Song Yun Kim) in their training for the North Korean “Mass Games” as choreographed gymnists.   We called it “tumbling” in PE in high school.
The film centers around the extreme form of Communism that insists on submitting the individual to the well being of the “collective”.
North Korea seems to have almost no money economy was we know it.  The two women live in a family apartment allotted to them by the state, with state radio, which cannot be turned off, always talking in the apartment.  State propaganda also blares throughout the city of Pyongyang, 2 million.
Despite the emphasis on unity and conformity, the dance performances are garish with color, and sometimes use western-style music.
The preparations occurred while the SARS epidemic was going on in China, and North Korea delayed many of the activities out of fear of “contagion” (as with the current film by that name) even though there is little air traffic between North Korea and the rest of the world.
Later some of the girls are replaced by boys.
Toward the end of the film, there is some spectacular mountain scenery, almost like it was out of “Lord of the Rings”, as the girls make a pilgrimage to Mt. Paekdu.
North Korean propaganda says that it “won” the Korean War in the 1950s.
The official site for sale of the video is here. There is also school pricing.
The film is available for Instant Play to Netflix subscribers.
Wikipedia attribution link for aerial view of the capital.
Posted by Bill Boushka at 2:25 PM