"L.A. Zombie" is really a social statement; if this kind of extraterrestrial walked off the beach, who would notice? 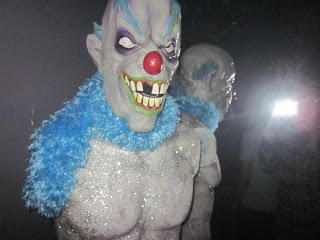 
Francois Sagat plays the blue-painted extraterrestrial zombie who emerges from the Pacific Ocean (the opening shots make you expect a surfing movie, or maybe “Summerland”), to get picked up as a hitchhiker by a surfer (why?) and then go on to bring as many homeless people on skid row back to life as possible.  You know how.  I suppose this is a twist on vampire movies (or maybe the old 50s Saturday night chiller “The Undead”). There is a particular visual concept. The Zombie likes to probe “openings” wherever they are on the body (I can almost imagine the havoc that could happen in a disco scene had LaBruce took the film into that territory).  On a PG-13 blog, I can’t describe it more specifically.   There are scenes that explore the color red very artfully. Finally, we are led to question whether Zombie is really an alien or just thinks he is, out of schizophrenia.
The film actually depicts how homeless men live rather graphically, and probably true to life – sometimes in cardboard shacks, sometimes in culverts dug out of the LA water system.  Sometimes LaBruce gives us handsome shots of modern downtown LA for contrast.
The style, despite the garish color, is a bit that of old silent movies, with sparse, earthy dialogue.  There is a curious use of a late Chopin Nocturne in one scene, and some rather interesting modern brass music in others.
Here is Strand’s official site. I received a review copy from Strand.
LaBruce does an interview on YouTube, and describes it as motivated by a desire to make us examine how we look at society’s outcasts.  He mentions the irony over fear of HIV.  The “victims” come back to life as their own persons or human beings, not as zombies themselves.
Could this film become a “midnight cult classic”?  Maybe not like “The Room”.
Picture at to of post: from a disco party, not from film. However the blue color and general appearance is similar to that of the zombie in the film, in some scenes.
Note: I reviewed the new WB release "Contagion" (with Matt Damon, dir. Steven Sodernergh) on my "Films on Major Threats to Freedom" blog today.  I guess the zombie film represents a different kind of "contagion."
Posted by Bill Boushka at 8:48 PM