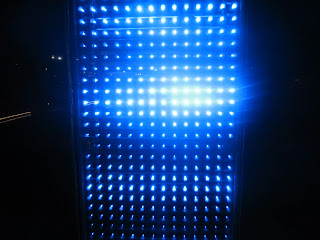 Gus Van Sant is certainly peripatetic. He can give us sweeping “indie” films like “Good Will Hunting” (that was really Matt and Ben’s idea) and “Milk” and even “Finding Forrester”, or he can take us through wastelands as in the “Psycho” remake, or “Gerry”, “Elephant”, or this little film, “Restless”.
You have a twentyish boy Enoch (Henry Hopper) showing up at funerals so often (to “gawk” in good clothes) that a funeral director threatens to have him arrested, and then meeting an falling “in love” with a terminally ill girl Annabel (Mia Wasikowska), down to her last ninety days of futile radiation and chemo trying to hold back her brain tumor.
But this is not “Love Story” (and it isn’t “My Sister’s Keeper” either), and it isn’t quite the meandering, wandering tragedy of two lost hikers in “Gerry” (in that movie, there was no resource like in “127 Hours”).  A good clue as to what level of reality is operative here comes from the ghost of a kamikaze pilot (Ryo Kase) who gets introduced in a scene where he and Enoch are playing Go (but announce the rows as if they were chess moves).
There’s a line where Enoch tells about an earlier auto accident, and talks about his few days of being dead, and how there is absolutely nothing. So that leaves us wondering if he is climbing Jacob’s Ladder.
Columbia Pictures, along with Imagine Entertainment, is listed as a production company, but the film is distributed under the brand Sony Pictures Classics.
I saw this at the AMC Shirlington in the big auditorium (1.85:1) on a Thursday night and there were only two people in the auditorium, including me.
The official site is this.
Posted by Bill Boushka at 8:20 PM