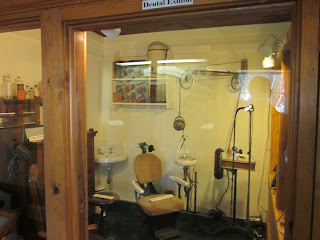 The title of John Madden’s new “Hitchcock-like” thriller “The Debt”, from Miramax and Focus (based on an earlier film “Ha-Hov”), takes on a double entendre perhaps, given this past summer’s political debate. In fact, within the layered story, the title takes on more than one meaning.
In 1997, just about the time the Internet has really gotten going, disturbing news reaches two aging former Israeli Mossad secret agents Rachel (Helen Mirren) and an accident-cripled Stefan (Tom Wilkinson) about a former colleague David (Ciaran Hinds), just as Rachel is promoting her own book-singing parties (about the time I was doing mine for “Do Ask Do Tell”).  Thirty years before, the trio had captured and dispatched a former Nazi war criminal and Birkenau “surgeon” Vogel (Jesper Christiensen) in dingy East Berlin.
Much of the movie portrays the backstory of the capture, and then what went wrong.  The younger Rachel (Jessica Chastain) actually offers herself for fertility treatments for the evil surgeon, and then attacks him, making it look like a heart attack, giving the trio the opportunity to kidnap and hold him. Younger Stefan is played by Marton Csokas, and young David (the script makes a lot of his “29th birthday) is played by Sam Worthington, who looks much “smoother” than in “Avatar” (what did they do to him for this part?)   Their “grungy as can be” apartment (it reminds me of the old East Village) becomes a trap for them.
There is some telling dialogue. Vogel tells Rachel, at one point, that the Jews were easy prey for the Holocaust because they were too personally “selfish” and individuals wouldn’t sacrifice themselves fir the good of the group (historically that’s false), so they didn’t “deserve to live” according to National Socialist ideology.  The elder Rachel demands “the truth” whereas the crippled Stefan lectures her that “the truth is a luxury” that not everyone can afford.
I had another reaction to the sequence taking place in East Berlin (actually filmed in Hungary); Rachel Bartlett (associated now with the Paul Rosenfels Community in New York) offers an “unusual” perspective on German unification in part 2 of her essay “We are made for these times” here.
Here is the site from North American distributor Universal Focus. I wonder why the collaboration between Disney and Universal was necessary for this "independent" film.
The film will certainly get into the Oscar race.  It does remind me of old-fashioned thrillers like "Marathon Man".
Additional news: There is a new film coming “Don’t Ask Don’t Tell”, with more information posted today on my GLBT blog.  I’ll see it as soon as it is available.
Posted by Bill Boushka at 3:32 PM