DC Shorts in Arlington VA: "Sudden Death!" is a musical (maybe a parody of "Contagion"?) 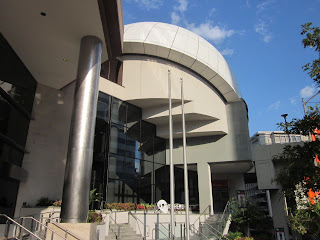 Today, 9/11, I saw Showcase 6 of the DC Shorts Film Festival, at the Artisphere in the Rosslyn section of Arlington VA.  The facility has what looks like a small IMAX auditorium, which did not necessarily serve regular video and film that well. 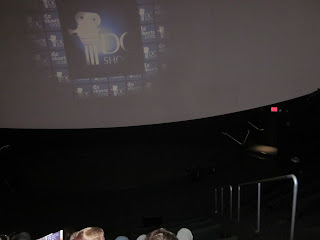 The principle film was “Sudden Death!” (19 min), by Adam Hall. There is an epidemic (in LA) where people break out singing and dancing and drop dead.  What does the “cure” involve, giving up dancing?  The link is here.   With Matt Lutz, Adam Hurlbert, and Doug Jones.   The lilting music is by Kenny Wood.  It’s ironic this plays when the big film “Contagion” opens (see Sept. 9).  (Don't mix this up with the 1995 film with Van Demme; note the punctuation mark in the new film's title.)
The next most important film is “Der Eisangler” (“The Icefisher”), by Anna Montanya, 17 min.  A little boy wants to hold his parents together as according to a fairy tale, and goes out onto a frozen lake fishing. Tragedy ensues.  The scenery looked like northern Minnesota.
Then there is “Eva Is Leaving”, from Israel, in Hebrew, by Aya Somech, 17 min. A man tries against all odds to keep his restaurant kosher.
“The Hack”, by Travis Alford and Nicholas Mah, 12 min, has an exiled (or maybe blackballed, as with Trumbo) screenwriter finishing a screenplay on a rebellious typewriter, which becomes a character. This must be taking place in the days before personal computers. He doesn’t even follow the FinalDraft format.  There are shades of “Barton Fink”.
“The Potential Wives of Norman Mao”, 8 min, by Derek Nguyen, plays on the insistence of some people that they get grandchildren.  They send their babied son around the world trying to find a wife, and wil disinherit him if he doesn’t marry. In the end, he settles for what’s realistic.  (Sounds like “The Bachelor” or even “Marty”.) The only film shot 2.35:1.
“Rumbleseat”, 6 min, by Mike Roberts, is a rotoscopic animated short that puts a sports car driver on another planet.  How many light years away?  What would a planet with a diamond surface look like anyway?
“Fake Beard”, 6 min, by Craig Peck, plays on the role of “appearances” starting out with a rather attractive young man in a boring job.
“Heart Says It All”, 5 min, by David Eagle,  has a couple meeting after sending love letters with candy hearts. When one of the pair wants to break it off, a comic but violent and grisly end comes. Not so funny as a comedy.  No "I (Heart) Huckabees" here.
Posted by Bill Boushka at 6:01 PM

Mike Roberts here... No rotoscoping involved! It was all after effects puppets, like paper dolls. Hope you liked it.

Would love to see filmmakers work on a redo of NatGeo's "Extraterrestrials" (2005). Puppets might be hard, Rotoscoping would work.